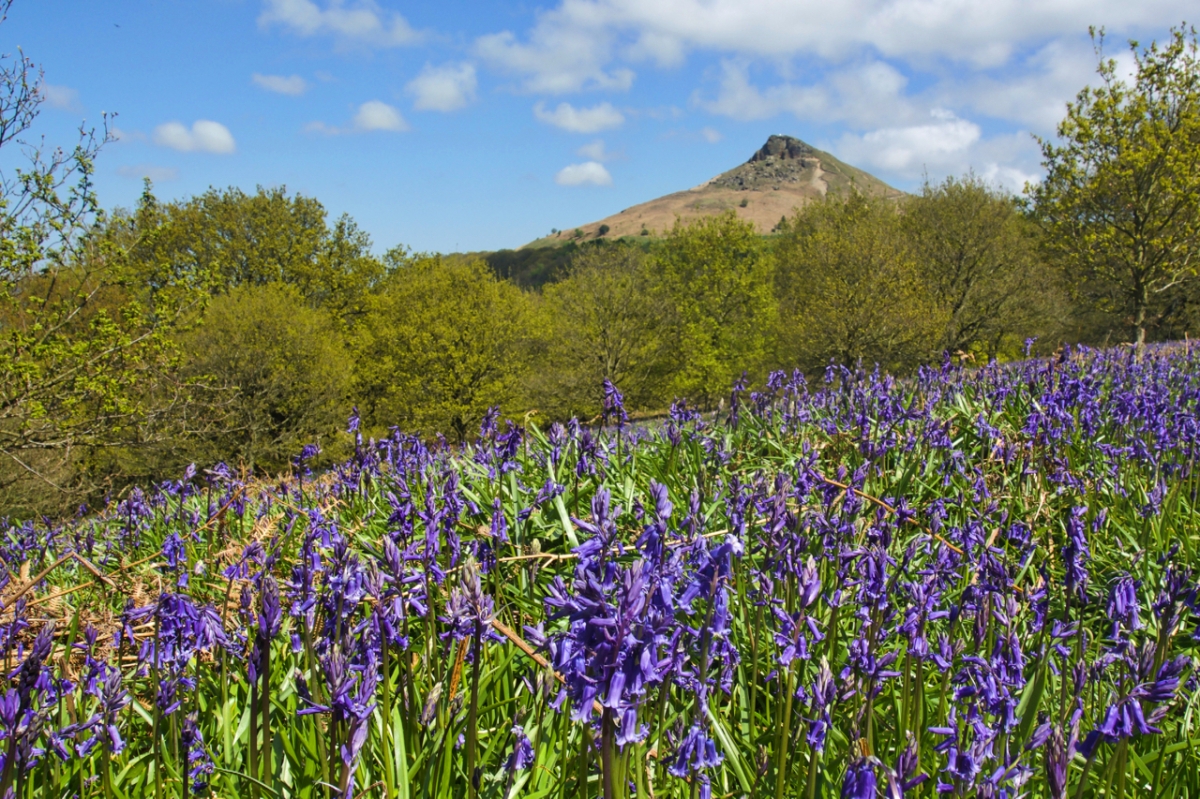 My annual sally into the bluebells in Newton Wood. Maybe still a little early but my patience has run out. An iconic shot, found by just following the paths created by other photographers.

The Bluebell is the sweetest flower
That waves in summer air:
Its blossoms have the mightiest power
To soothe my spirit’s care.

Cockle Scar is the distinctive escarpment half way up Roseberry.  It extends about the 200m contour from Newton Wood to the promontory at the northern tip of the hill. Along it there are approximately 40 pits of up to 50 feet in diameter and 3 to 6 feet deep. No one has come up with an explanation when and why they were dug. For they are most certainly man made. The pits are in a long line along the edge of the scar with a cluster on the promontory.

No excavations have been formally done but no less a person than Sir Alfred Pease (1857-1939) recounted digging flints and arrowheads out of the pits when he was a young lad.

Various theories have been proposed:

All these have their problems. With mineral extraction, the geologists tell us that there is no stone of any value at this level. The Staithes sandstone which the scar comprises is too poor a quality for use as a building material and is 35m lower than the ironstone and jet layers. I guess pre-historic man could have been exploring for these rocks but then why dig so many pits so close to each other. As far as habitation is concerned a settlement on the scar would be in a very exposed position subject to the full force of north easterlies sweeping off the North Sea. Temporary summer dwellings seem more believable. Similar perhaps to the Scottish shielings. Defensive just doesn’t gel. What were they defending? I can understand a hill fort surrounding a flattish area that the local folk could retreat to. A lookout I get but again why so many?

Which leaves us with ritual. The archaeologists’ fall back. Maybe the pits had something to do with Roseberry being a holy mountain. The domain of shamans ‘protecting’ the hill. Or maybe the clue lies in the name, Cockle Scar. Cockle is derived from the French word coquille for a shell and we know the strata contains fossils in the form of ammonites. So maybe, just maybe, prehistoric man was looking for ammonites which would probably have had some ceremonial importance. Or have I begun to delve too much into fantasy. 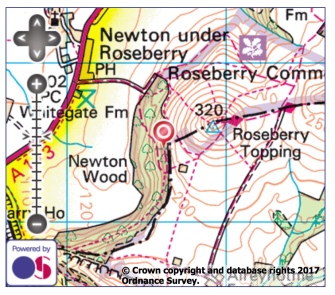 The oak woods of Newton skirting the foot of Roseberry are beginning to wake up from its winter hibernation. This lichen has probably been there all winter but I must admit that only in the spring sunshine have I noticed it. They say that lichens are a sign of clean air which is a good sign close to industrial Teesside. Lichens are notoriously difficult to identify. I think this is Oakmoss or Evernia prunastri by its scientific name. It is still used in the French perfume industry as a fixative where it is known as Mousse de Chêne. 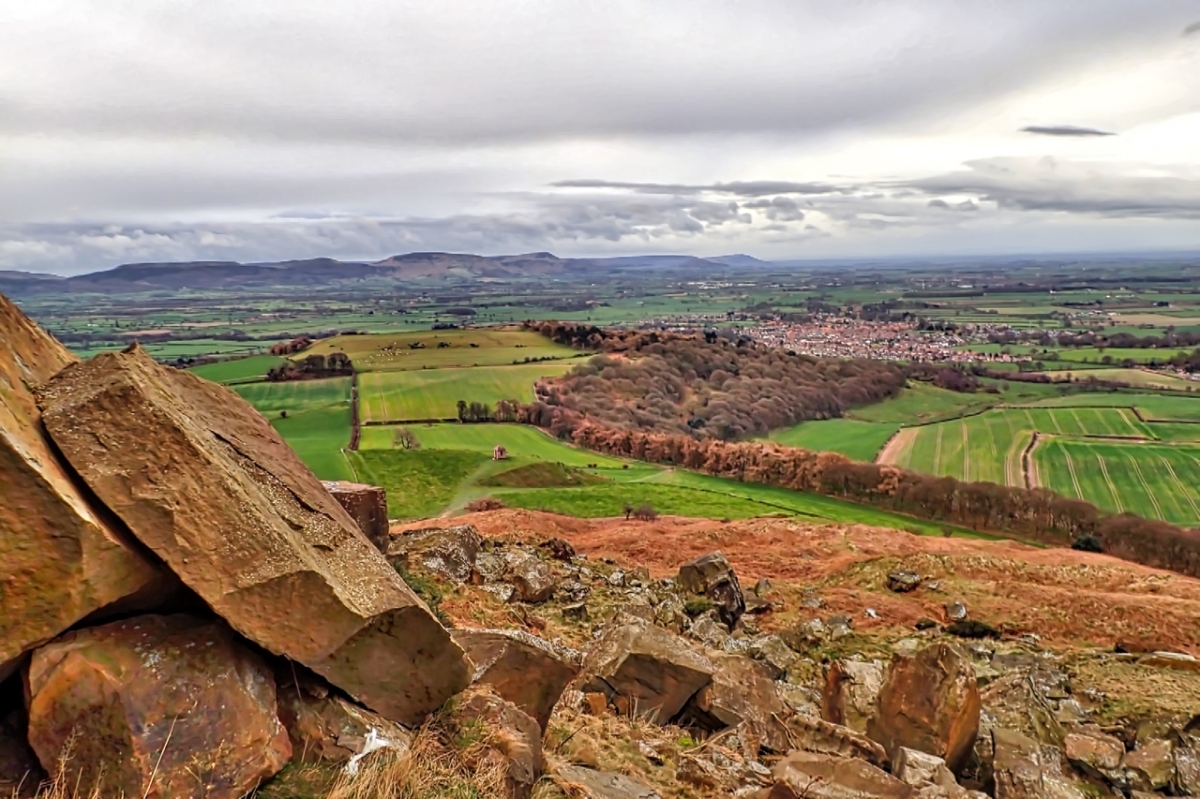 Boulders of Oolite sandstone litter the south west slope of Roseberry, the result of a monumental landslip in 1912. It was said at the time the ironstone miners were to blame but the geologists tell us now that was not so. It would have happened anyway, and it is still happening. The softer mudstone shales are still being eroded weakening the foundations of the crag. A new rockfall will occur. It might be a thousand years but it will occur.

Down below the oakwoods of Newton Wood adorn the escarpment of another sandstone layer, of a much poorer quality to be useful for building stone and in the distance, on the Cleveland Plain, the village of Great Ayton wakes up on this Monday morning. 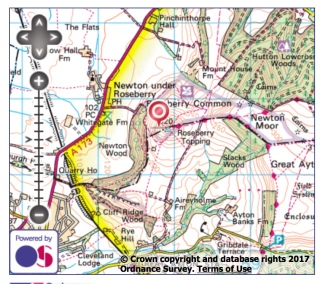 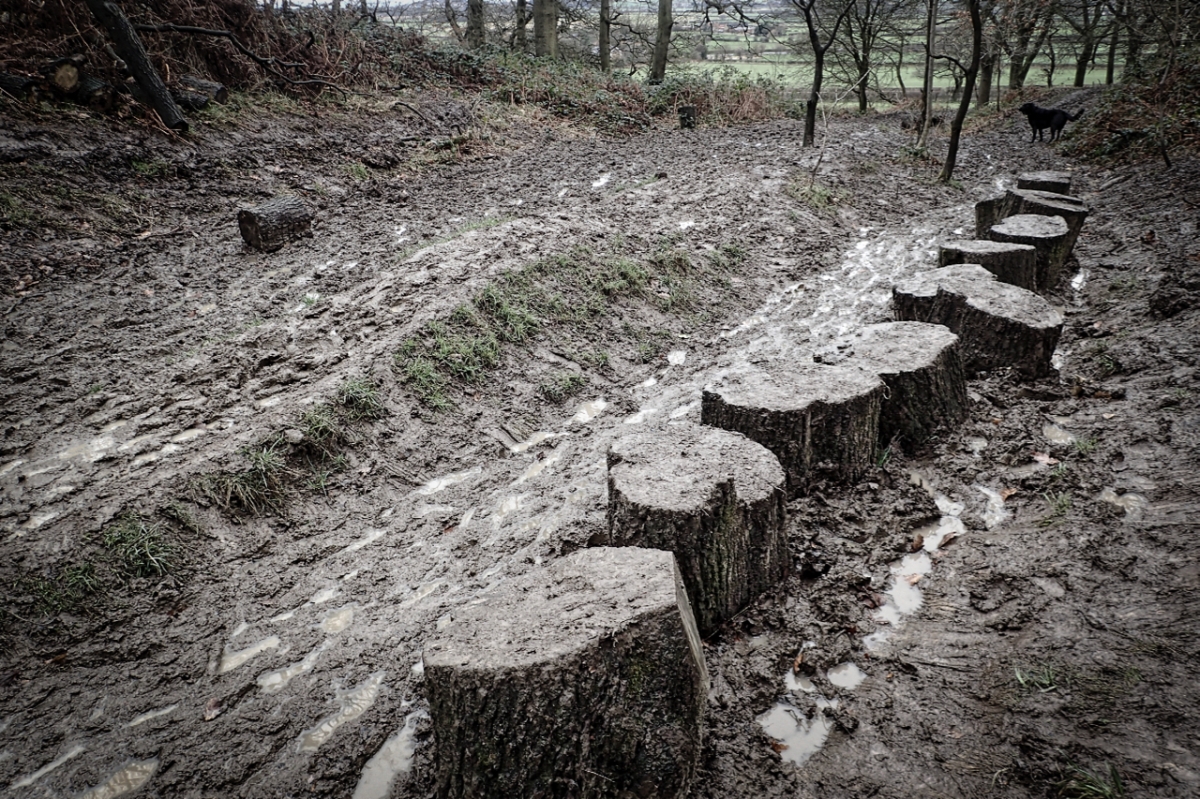 I’ve only been back in England for two days and already I feel as though I’m evolving webbed feet. This is the lower path at Newton Woods, part of the National Trust’s Roseberry property. It’s actually a Public Bridleway. I’m not sure the purpose of the logs. A bit dicey to use as stepping stones for me but people are using them. A proposal has been mooted to improve the whole footpath along the bottom of the wood to make it wheelchair accessible which I think would be a good idea. But back to mud which gives me the excuse to mention that glorious Swedish word for mud geggamoja. It also reminds me of a popular poem, I must have read it in one of my children’s books. Or maybe it is a memory of my own childhood. Anyway it’s by an America lady named Polly Boyden:

Mud is very nice to feel
All squishy-squash between the toes!
I’d rather wade in wiggly mud
Than smell a yellow rose

Nobody else but the rosebush knows
How nice mud feels
Between the toes. 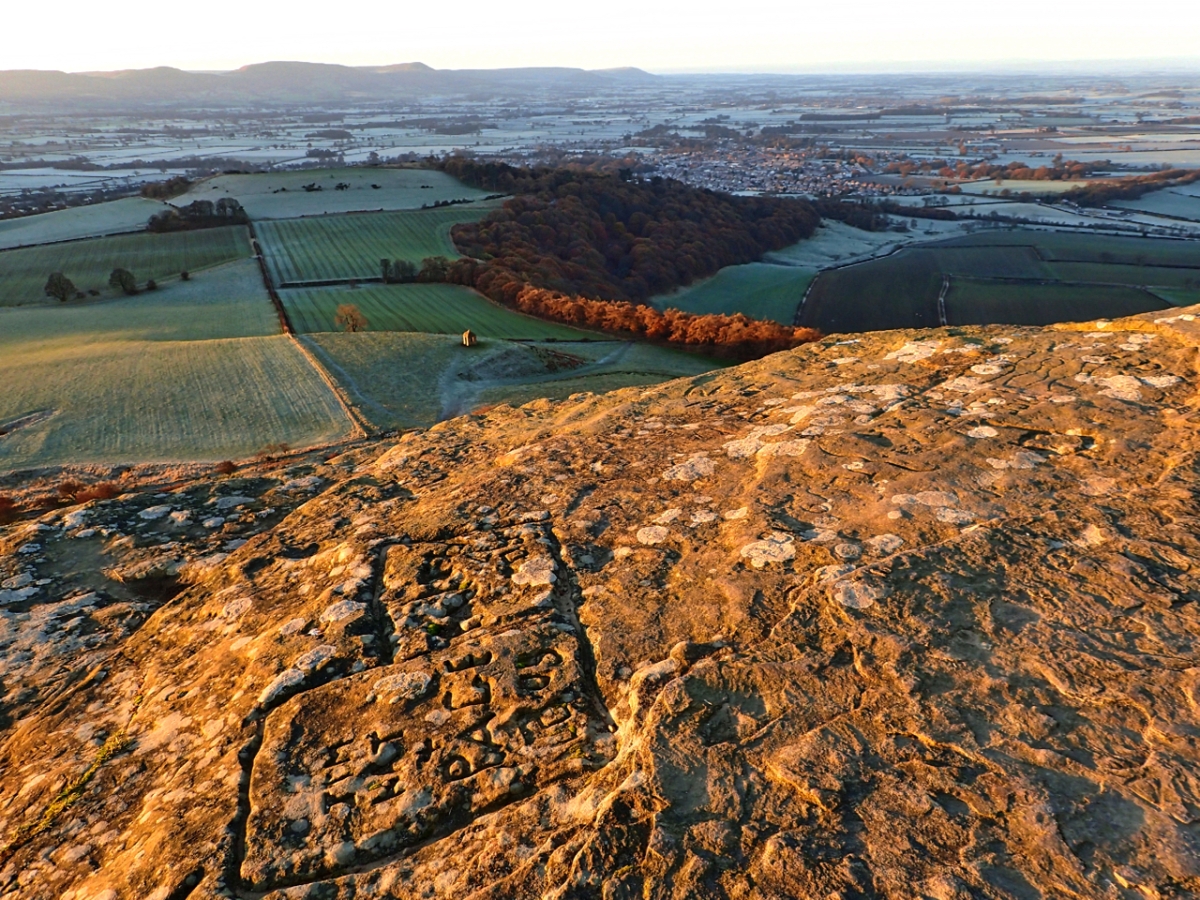 An early start on a frosty morning with cloudless skies. Roseberry summited as the first rays of sunshine are reaching the summerhouse below. Cliff Ridge and Newton Woods are still in shade.

A wet afternoon. A faint glimpse of Roseberry through the oak canopy of Newton Wood, rain lashing down.

Not very blue in Autumn. Compare with a photo I took almost from the same spot a year and six months ago. The blues of May have been replaced by the golden hues of Autumn.

Meanwhile we drift into the month of November. The word has a Latin root, novem or nine, for in the calendar of ancient Rome November was the nineth month until January and February were added when it became the eleventh.

Bracken, carcinogenic, toxic to livestock, invasive and dominating, smothering the growth of other plants. At the height of the summer it forms an impenetrable undergrowth.

Yet the autumn bracken changes to rich yellow hues. Super even on a drizzly morning.

A day spent working with the National Trust to carry out repairs to the steps on the main tourist route up Roseberry through Newton Woods. Two tonnes of hardcore hand carried up in buckets to make good the treads which had sunk due to compaction. 28 done, only 170 to go.