St. Swithin’s Day. It doesn’t bode well for the next forty days. It almost dried up this afternoon so went for a wander. So any idea what this is? Perhaps a clue would be in order. We went to Saltburn-by-the-Sea.

High tide and the only stretch of beach accessible is beyond the Ship Inn, Old Saltburn which in the mid 18th century consisted of just the inn and a handful of cottages along the gill.  Along came the railway tycoon Henry Pease who developed a new town high on the cliffs. We had come in the expectation of a good sunset but somewhat disappointing. 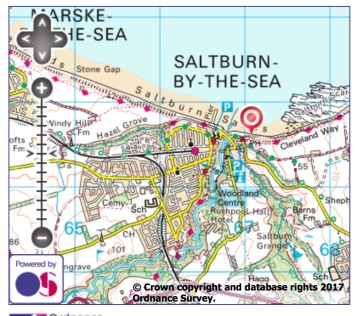 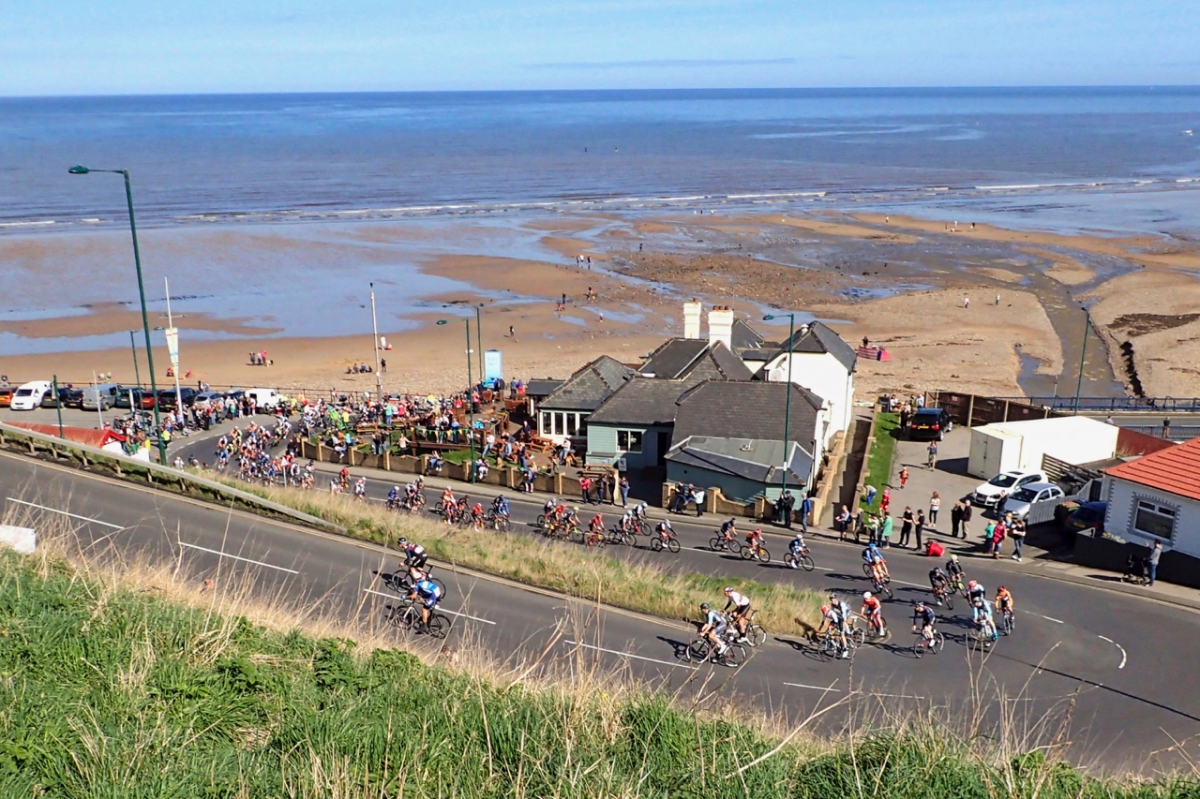 A day spent cycling around the villages of East Cleveland following Klondike Grand Prix Cycle Race. Superbly organised and well supported with a great atmosphere. In the photo the peloton is climbing Saltburn bank. 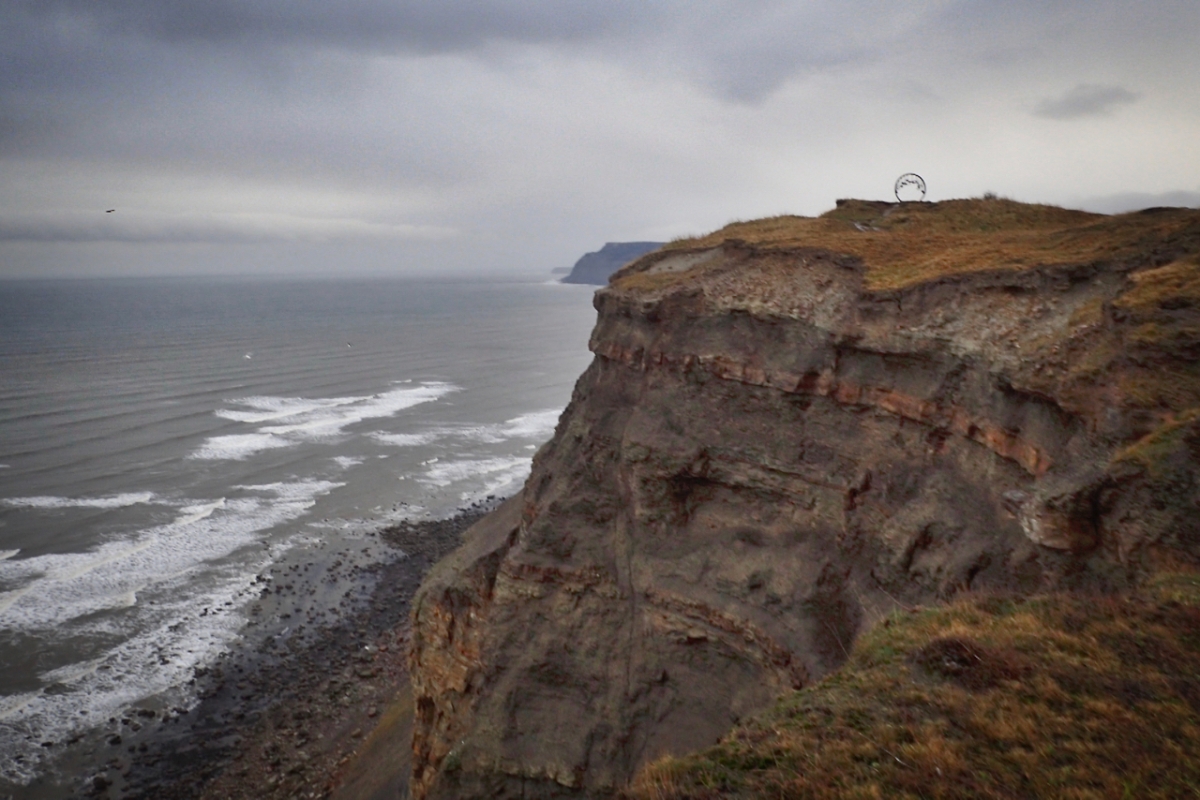 A familiar view to those walking the Cleveland Way. The cliffs represent 26 million years of deposition of sediment at the bottom of shallow seas at a time the geologists call the Lower Jurassic. The sandwiched bedding layers of the mudstones, sandstones and ironstones are well defined. The harder sandstones and ironstones are more resistant to erosion and over time become undercut eventually toppling down to the base of the cliff.

On the top of the cliff beside the Cleveland Way is a much photographed piece of public art, the Huntcliff Circle, one of a collection of three sculptures by Richard Farrington. It was erected in 1990 and lasted six years before being vandalised suffering the indignity of ending up at the bottom of the cliff. Although after twenty seven years it has now become part of the scenery it is regrettable it is felt that our landscapes need to be so ‘improved’. 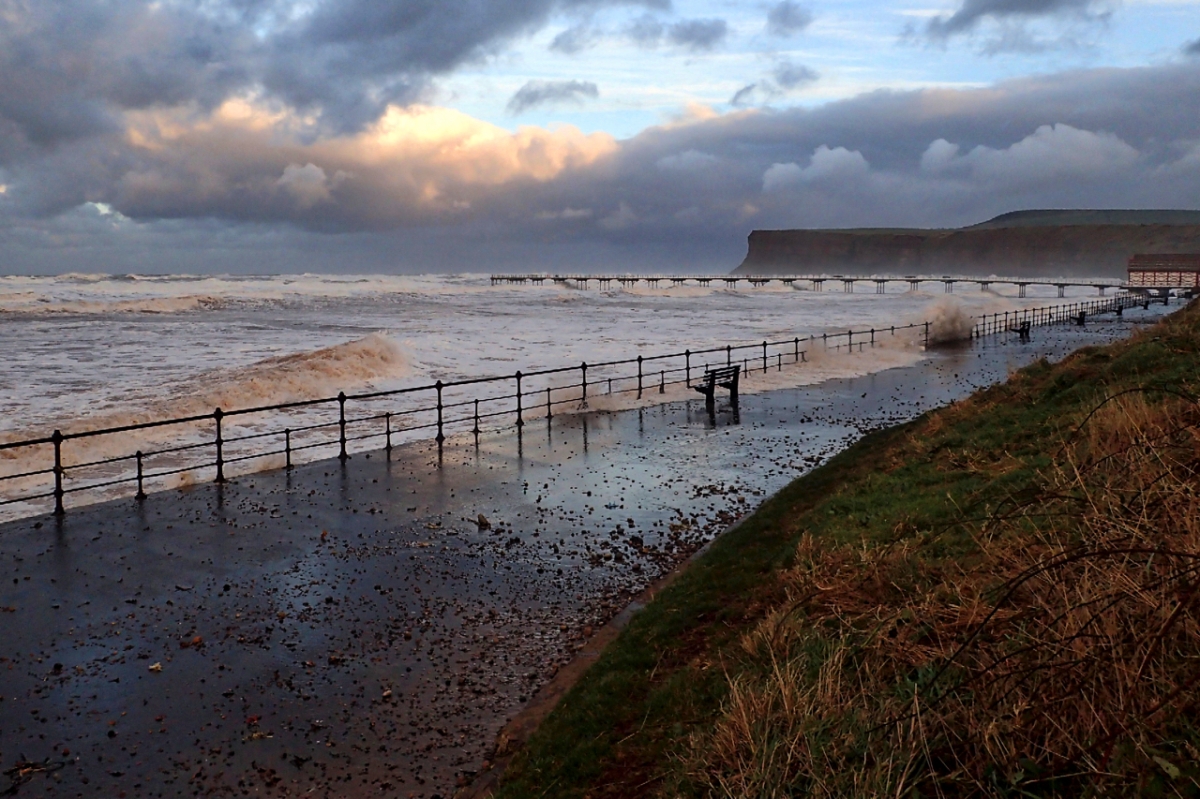 A stroll along the prom. The tide is big, there’s a storm surge. Waves should be good. A course day, blowing a hooley.  Maybe a promenade is not such a good idea. 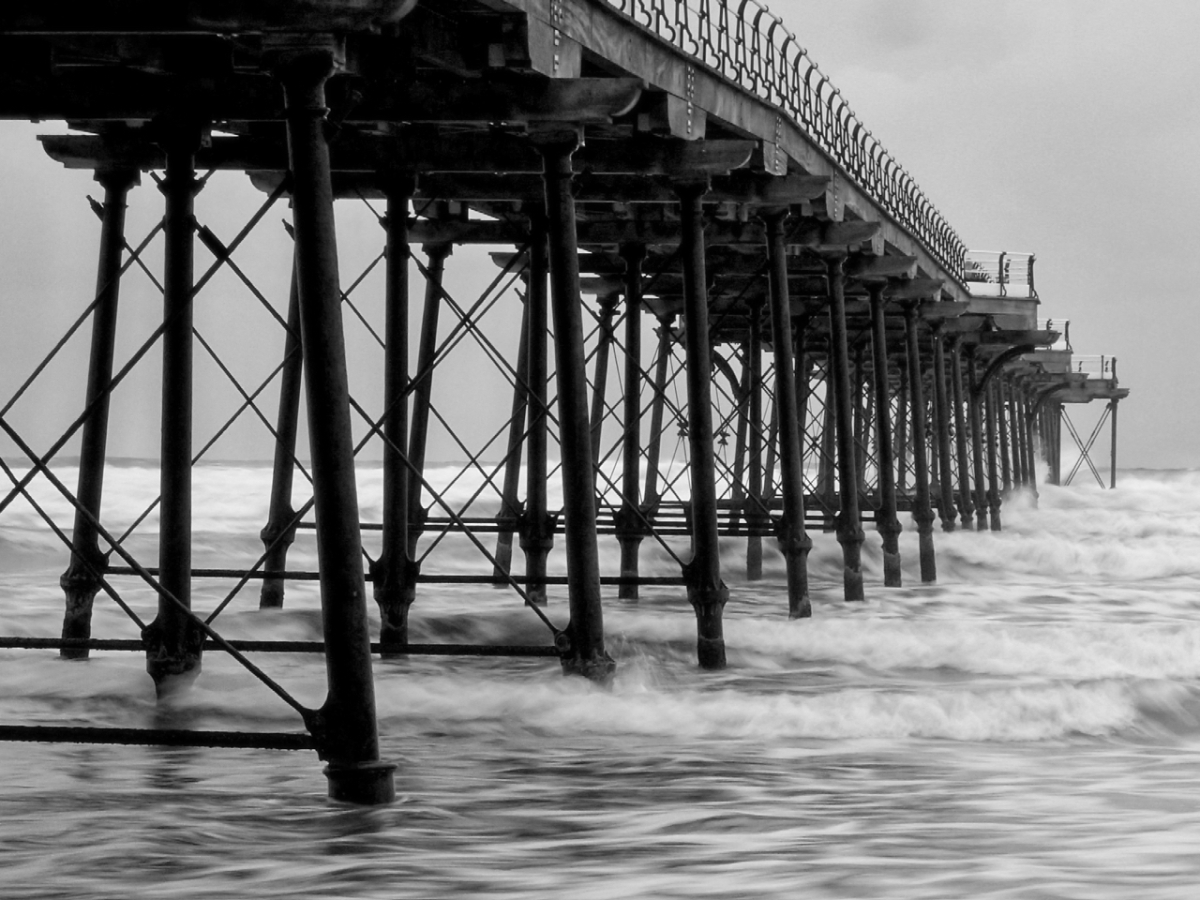 A late afternoon walk on the beach at Saltburn with the tide on the turn. Breezy and big seas.

Low tide at Saltburn and an afternoon wander on the beach was rewarded by this double rainbow. The darker area of sky between them is known as Alexander’s dark band after Alexander of Aphrodisias in the 2nd century AD. There is rain there but any light reflected in the raindrops is not reaching the observer.

One piece of old folklore says:

Perhaps a bit of poetic licence with the words. Night presumably means afternoon and as our prevailing weather comes from the west it’s likely that if we see a rainbow after lunch it will be in the east and the weather have passed or soon will do. But in the morning a rainbow will be in the west so the rain is likely to be heading towards us.

Hidden in Thorny Close Wood on the steep bank of Skelton Beck is an old mining drift. Work was started in 1865 as an exploratory drift for the Skelton ironstone royalty at its northern extremity. The ironstone seam proved elusive because of what we now know to be a syncline and after a series of boreholes North Skelton Mine was chosen for the shaft and opened in 1872. This would be the deepest ironstone mine in Cleveland.
A year after North Skelton was opened, a new shaft, Long Acres Mne, was proposed to work the northern part of the royalty with this drift being utilised for drainage. Long Acres Mine was situated where Asda is now and operated until 1915 after which stone was extracted through North Skelton although the shaft was kept open for ventilation until the mid 50s. The last ore was raised from North Skelton Mine in 1964.
The entrance was used in a night navigation exercise a week or so ago and this was a return visit. I didn’t go in far, just stood in the entrance. The floor was flooded and I am told there has been a rock fall after 15m which I think is just visible in the photo. 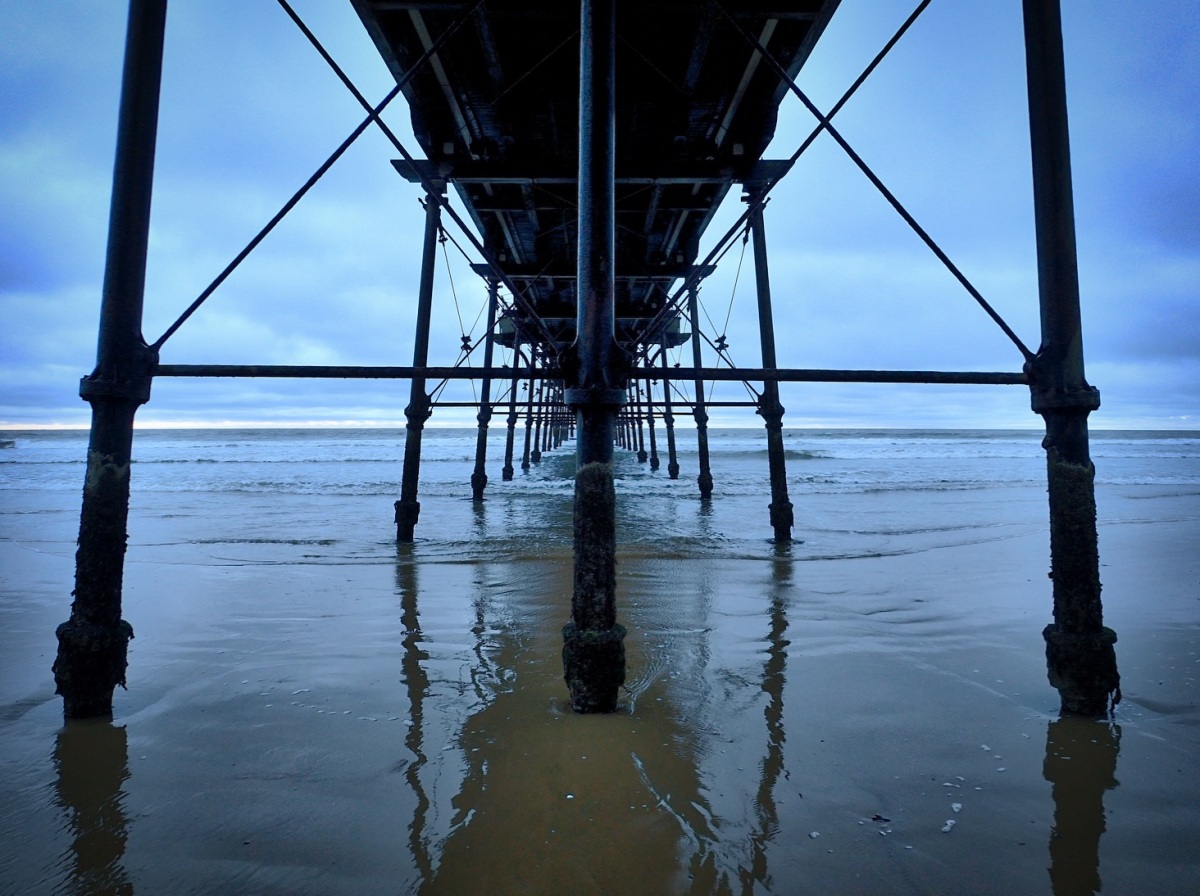 Rain most of the day but by late afternoon the front had passed so with the tide rising and light fading, and the dog needing a walk, we headed for Saltburn beach.

The pier is the last in the North East. Once most seaside resorts had them. Originally Saltburn’s was 1,500 feet long and a steamer service operated to Middlesbrough. It’s now a mere 681 feet. 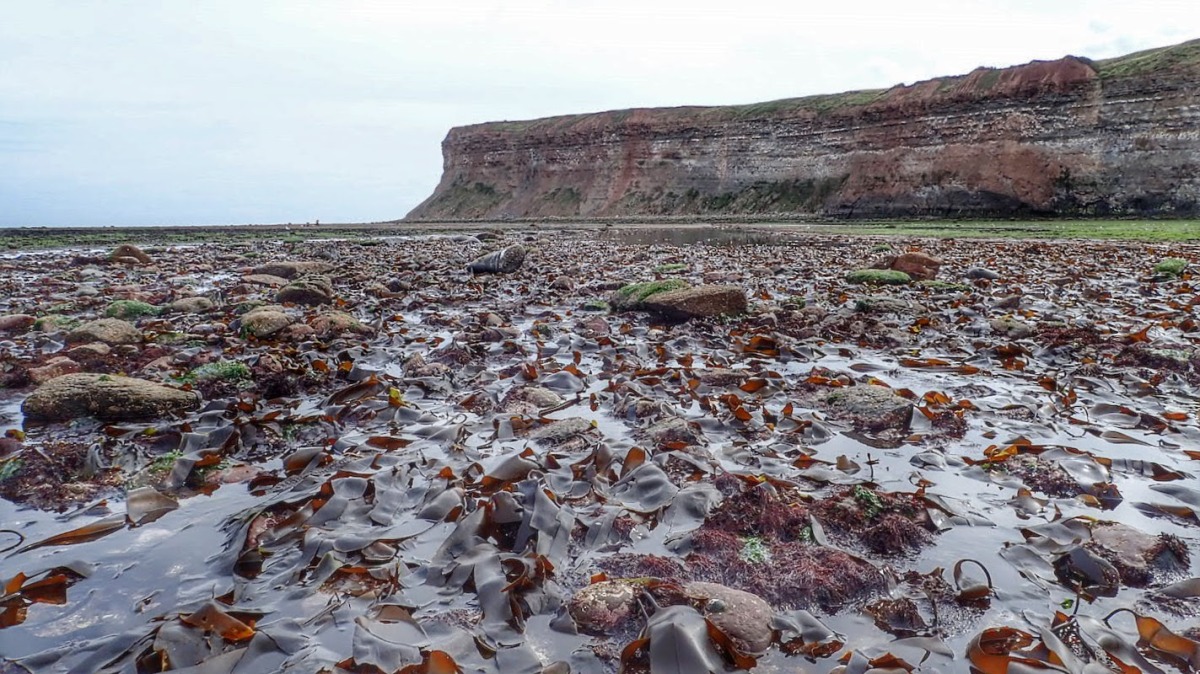 Low tide on Saltburn Scar. A great places for exploring the rock pools. Behind, in the spring, Hunt Cliff provides a towering hotel for nesting sea birds. Its sandstone cliffs formed between 188 and 191 million years ago when Yorkshire was covered by a warm tropical estuary.