Sorry but I just couldn’t resist another photo of the purple swathe of a heather moor. The ling is now in full bloom and for just a few weeks the colour is glorious. Highcliff Nab is in the distance and in the foreground is a sandstone boundary marker dating from the 19th century. ‘R C’ stands for Robert Chaloner, the principal landowner in Guisborough. This would probably be the son. His father was also a Robert but was declared bankrupt in 1825 yet somehow the family still managed to keep control of the estate. Robert junior could be said to have made a better success of the estate but this was no doubt because of the saviour of ironstone prosperity. The land belonged originally to Guisborough Priory and after the dissolution, Thomas Chaloner purchased it from the Crown for £1,000 in 1550.

I have mentioned before my discovery on the 1853 Ordnance Survey map that the hill on the right is shown covered in trees and named Mount Vittoria Plantation. It’s modern name being Cold Moor. The boundary stone is inscribed with an ‘E’ and is on the east flank of Cringle Moor which according to the same 1853 O.S. map was named as Cringley Moor.

An overcast morning, with the tops just a few metres below the cloud base. Both moors are on popular walking routes, traversed by the Cleveland Way, but I saw only one person today. Far left, across the vale of Cleveland, is Roseberry Topping. 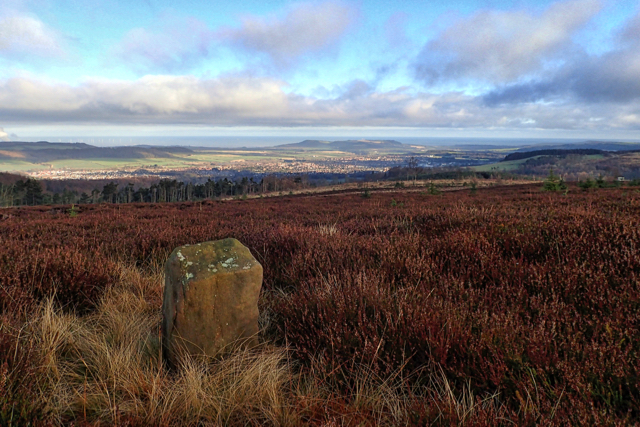 Boundary stones are a safe bet as a subject, so prolific, there must be scores of them on the moors, with many inscribed, providing a tantalising glimpse of their history. This stone is on the boundary of Hutton and Newton Moors and is inscribed ‘RY 1752’.

RY stands for Ralph Yoward. There are several other of his boundary stones on the moors all with this date of 1752 which is a bit of a mystery. The Yowards were a Stokesley family who were the lesses of Crown Land in Hutton and of the Lordship of Hutton Manor. Ralph succeeded on the death of his father, Richard, in 1751 and almost immediately surrendered the lease. So the mystery which is baffling local historians is why the inscription is a year after Ralph gave up the lease.

Hutton became Crown Land following the dissolution of the Hospital of the Savoy in 1702 although the Yowards are recorded as being in receipt of tithes in 1691 so it is likely the lessor at that time was the hospital. The hospital itself has an interesting history. It was founded in 1512 in London by Henry VII for “poor and needy people”. Edward VI dissolved it in 1553 only for it to be refounded three years later by Queen Mary. It seems that Hutton was one of many estates that the Hospital acquired. The Hospital was sited on what is now occupied by the Savoy Hotel and Savoy Theatre in London; close by the only part of the original buildings to survive is the chapel. 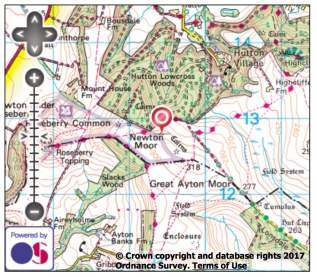 A bitterly cold morning, clumst as they say in the North East, the heather white with hoar frost crystals and the sun straining to break through the low lying cloud. Hoar is an Old English word meaning showing signs of old age but the moors are magic on these mornings, eerily quit, paths and bogs solid to run over.

The stone is on the Ernaldsti, the ancient track south across the moors from Guisborough to Westerdale and it’s likely to be a guide stone rather than a boundary stone. But that’s just my feeling. Behind is Kempswithin Fields, a reference perhaps to the 18th century agricultural experiment to improve the moor to grow corn, wheat and barley, rising to Pike Howe at 294m asl.

Obvious on the stone is a bench mark cut by the Ordnance Survey to record the height above Ordnance Datum. Although no longer maintained the Ordnance Survey have published their complete listing of half a million bench marks which tells me this one was cut in 1953, is at NZ64750820 and is precisely 283.019m above sea level. Unless of course it’s slowly sinking into the peat under its own weight.

Stanghow Moor, more sphagnum moss than heather. Bisecting it is a well defined boundary between the parishes of Stanghow and Guisborough with a series of boundary stones. This is one of several that are limestone, unusual on the sandstone capped moorland but a stratum of interbedded limestone/sandstone does outcrop south towards Commondale. It would be interesting to known where this stone was quarried. It must have taken some effort to transport here.

I haven’t been able to find out who SK and AWᴰ were but TC must refer to Thomas Chaloner, Lord Gisborough. In 1814 King George III had was developing his final stages of his madness what we understand now as dementia. It would be another year before The Napoleonic Wars were over and in London a large vat full of beer at Meux’s Brewery burst, demolishing buildings and killing nine people.

Sneaking into the photo on the left is not a Barghest nor a Gytrash but my faithful hound, Kirby.

A boundary stone atop Burton Howe, a round barrow on a snow covered Ingleby Moor. The track is modern and provides access for the keepers and shooters but it roughly follows the line of a much earlier road named as “Ingleby Coal Road” on the 1857 Ordnance Survey map along the ridge Middle Head Top.  Coal was mined on nearby Baysdale Moor. It was a small scale activity dug by hand with the coal carted away by packhorse. 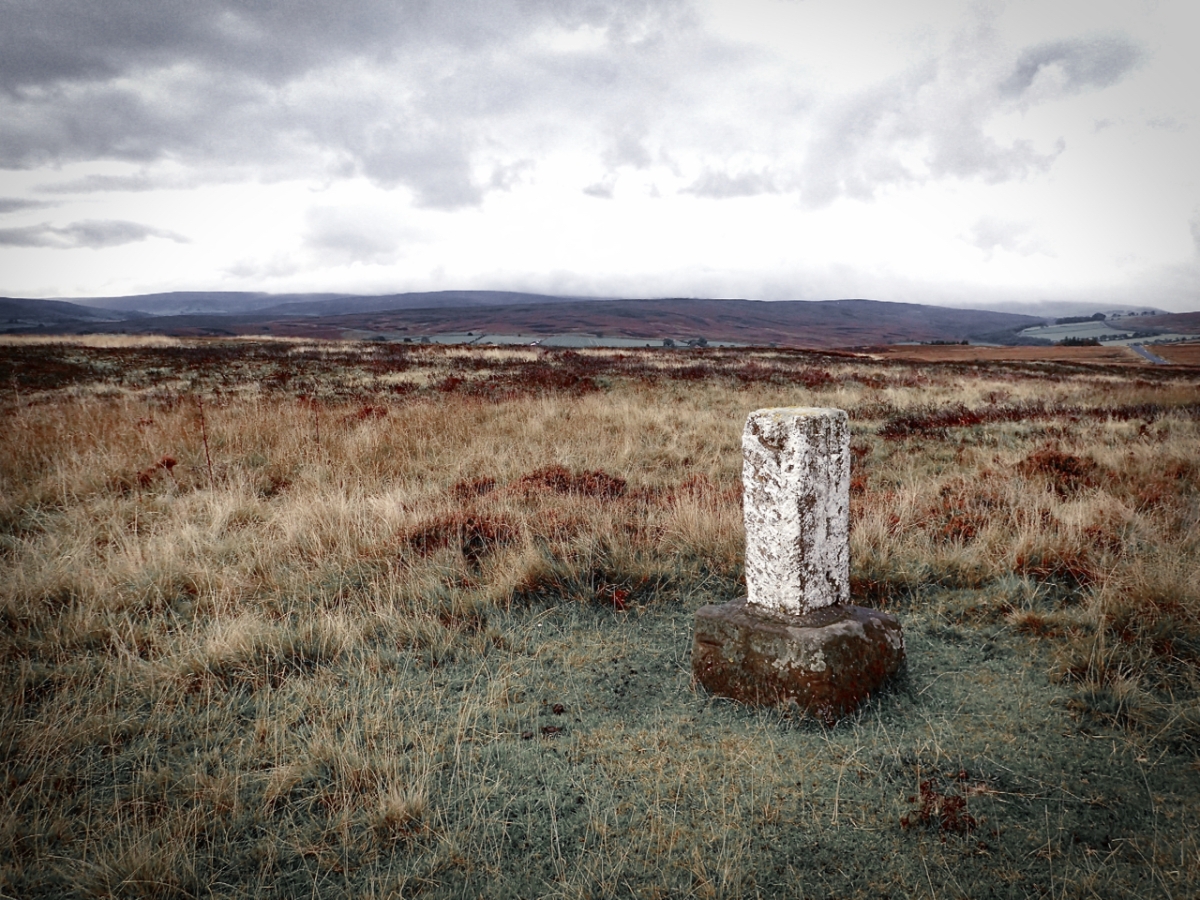 You might be forgiven for thinking that White Cross is so named because it is white but the whitewashing has been carried out by all the boundary stones of the Dawnay Estate. The stone post is actually 19th century sandstone but the limestone base is much older probably medieval. The original Christian cross now resides in Whitby Museum. The cross can be found at the junction of two ancient roads, Smeathorns Road, linking Lingdale with Castleton and the old turnpike road from Stokesley to Whitby and a mile or so out of Commondale. 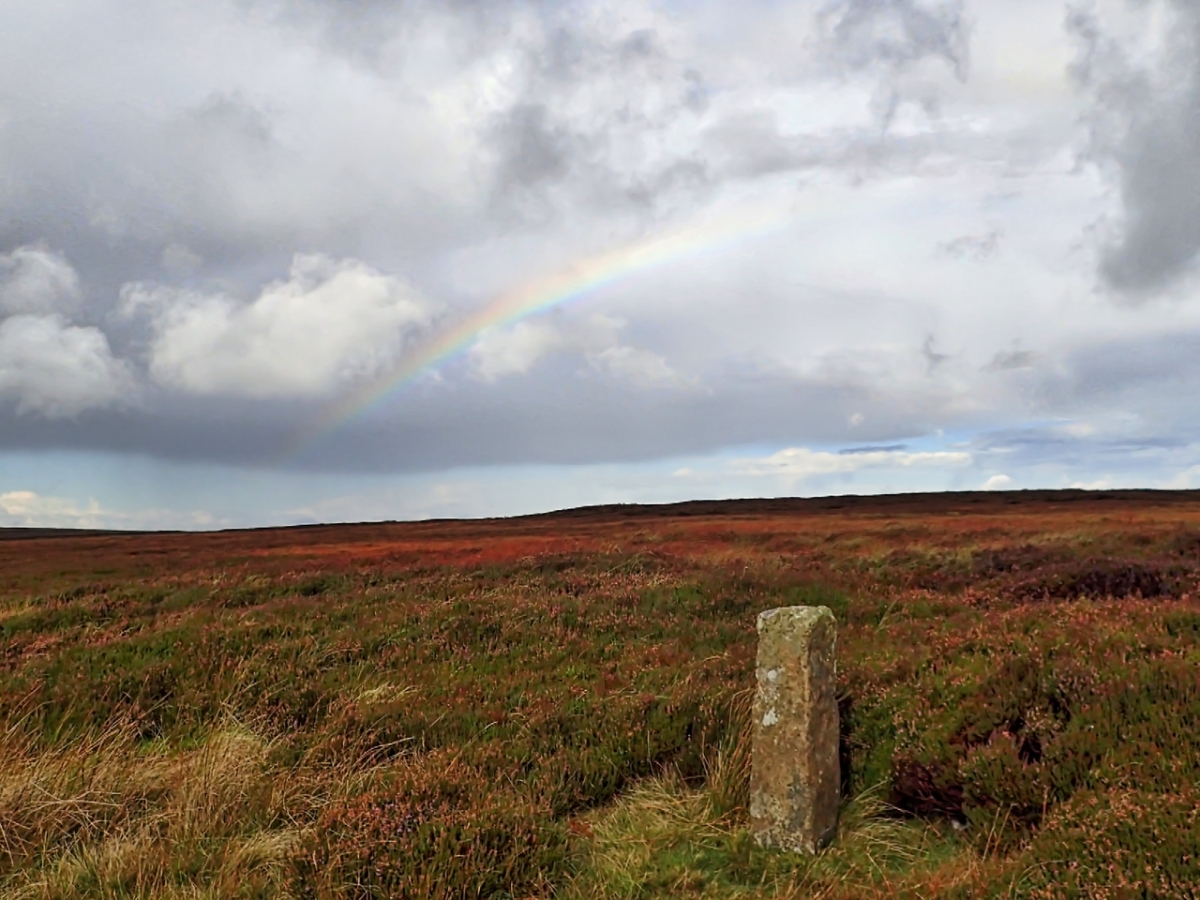 The rainbow portends a squall. It’s easy to forget winter is approaching. This boundary stone on Greenhow Moor looks 18th century, marking the limit of the Feversham Estate. Now is it the ‘Red Stone’ that’s marked on the 1857 Ordnance Survey map? The location is about right but this stone doesn’t look significant enough to warrant a name. Perhaps it replaced a more ancient stone.

A drab misty start to the week with rain threatening. The boundary stones across Urra Moor probably mark the limit of the Feversham estate. Bilsdale below is only just visible.

I heard yesterday that a new sculpture is being planned to be erected on Castleton Rigg over looking Westerdale. I just had to have a look at the place so I made that my mission for the day.

Castleton Rigg is a long finger of prime grouse moorland separating Westerdale with Danby Dale. It is not walked much owing principally I should imagine because the busy road from Castleton to Blakey Ridge runs up it. A series of stone boundary posts also runs along it denoting the boundary of Danby parish who keep up the traditional of painting these stones are white. Quite quaint actually. The heather moorland is owned by David Ross, co-founder of Carphone warehouse.

The proposed sculpture is by artist Sean Henry and is called The Seated Figure. Here is his impression. It’ll face east overlooking Westerdale. So that’ll be to the left of the summit on my photo but I don’t think it will protrude above it. It fact I don’t think it will be visible from the road (just off to the right in my photo). More details of the sculpture can be found on the North York Moors Planning website. 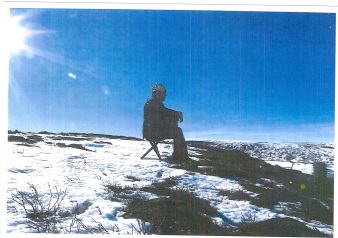 I am a bit ambivalent. On the one hand I am saddened that here is yet another example of Disneyfication of our National Parks but accept that I can’t live in a bubble with no changes to my little world. I didn’t like the Angel of the North at first but after 18 years I must admit is has grown on me. At 2.9 metres high this sculpture would be dwarfed by the 20 metre Angel. And I do like Sean Henry’s work.

Rich landowners have always sought to enhance the landscape. The folly on Roseberry Topping is one example. A better legacy would be to manage the moorland for all wildlife instead of maximising the production of one species.