It must have needed a torrent of water to have carved this gill on Pamperdale Moor near Osmotherley. Certainly not water from the spring mapped as Holy Well and situated way down the gill not far to its junction with Crabdale Beck. The “spring” in the photo, higher up, doesn’t even qualify with an Ordnance Survey symbol. It’s just a sodden patch of chalybeate stained moss. Behind me the now dry gill continues upwards culminating in a notch on Stoney Ridge with Scugdale. And there lies the clue, for at the time of the last ice age Scugdale was dammed by the glacier and was full to the brim with water. But at some time the narrow ridge gave way releasing millions of gallons of water from Lake Scugdale and carving the gill. 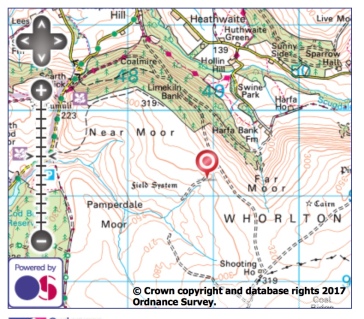 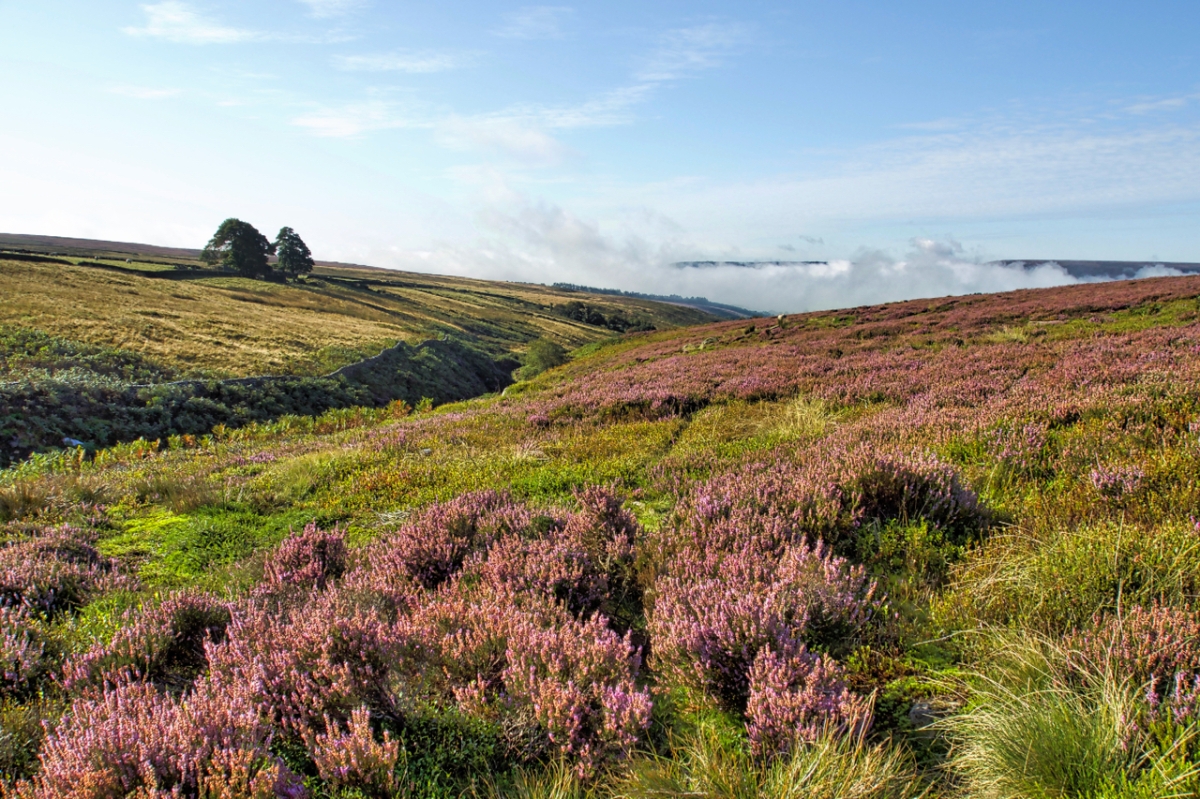 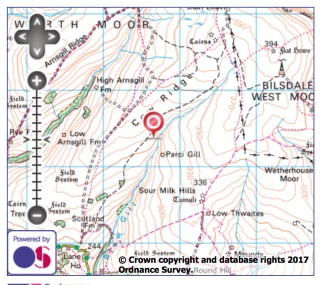 The small ridge on the left on an interesting and underused climb up High Spy from Grange. I call the path by the rather quaint name of Nitting Haws. Beyond Derwentwater in the distance Skiddaw with its head in cloud and Blencathra dead centre. 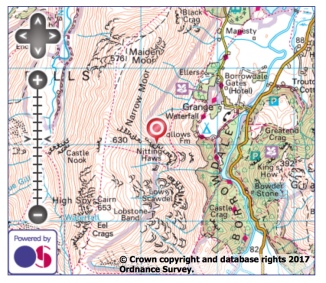 Also known as Slack’s Gill and until recently buried inside the commercial forestry of Black Bank. It’s my ‘secret’ way up onto Great Ayton Moor. Mine and the mountain bikers who created a downhill course through the wood. But the clear felling has put paid to their activities. I am sure the sandstone crags have been quarried but there is no evidence of the route the stones would have been hauled down the slope. The large boulder in the gill does have an anchor bolt on the top but I guess that could be modern, placed as a protection for rock climbers. I’ve rendered the photo into black and white as the carnage left by the clear felling is hidden. 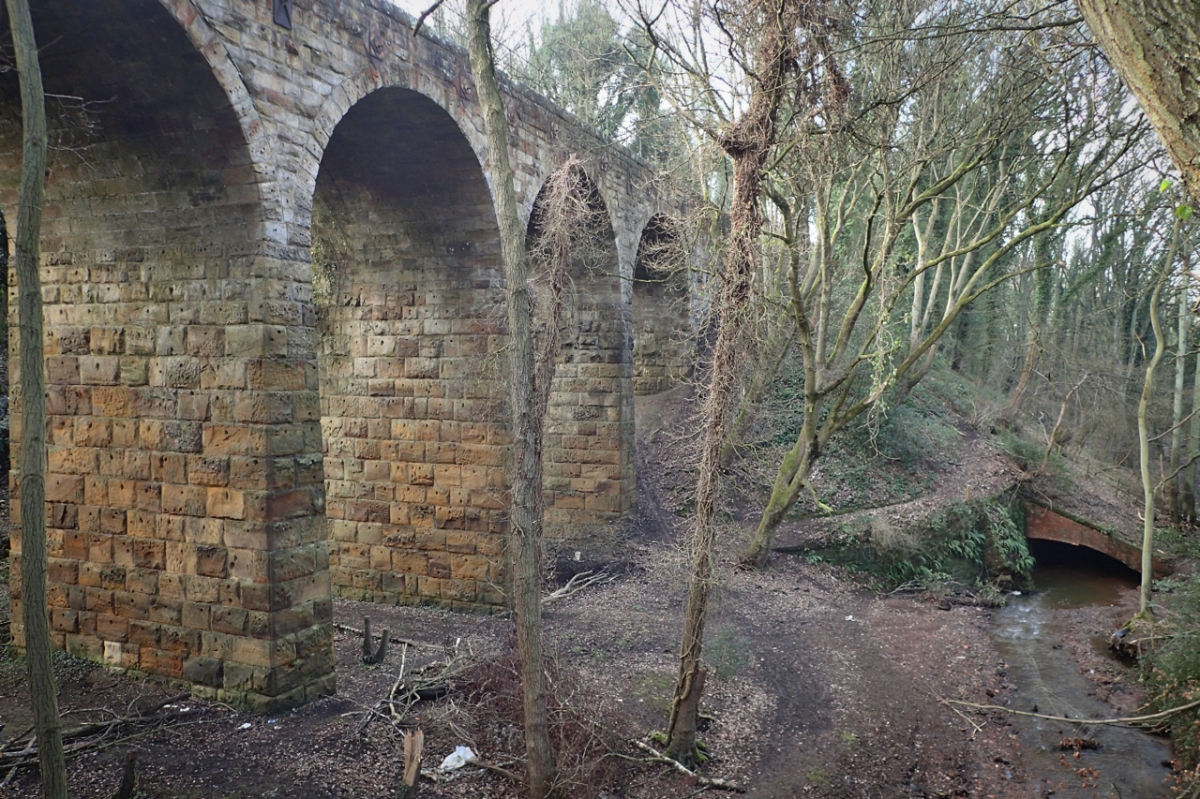 Pedalling along the A171 I was surprised to see this eight arch viaduct. Normally in the Summer it is hidden by the canopy of the woodland that towers above it but it looks as through some thinning has taken place. The trees that had taken root on the top and had been threatening the structure have been removed and apparently just dumped over the side which is a shame, perhaps done to impede the off road motor cyclists. The viaduct is well used by groups for an abseiling experience.

The viaduct was built in 1861 for the Cleveland Railway whose principal shareholders were Sir Lowthian Bell and Ralph Ward Jackson. Its sole purpose was to transport their iron ore from the Guisborough and East Cleveland mines to the foundries on the River Tees. Sixty feet high, it is a fine example of early railway architecture. Later in the 19th century greater standardisation of and appropriate quality in construction materials techniques became commonplace. For these reasons the viaduct has been scheduled a Grade II listed building status.

In 1865 the Cleveland Railway became part of the North Eastern Railway, Guisborough and Saltburn Branch and began to run passenger trains to Brotton and Loftus finally closing in 1964. The viaduct spans Spa Gill down which flows Jocks Row Beck. On the right in the photo Jocks Row Beck can be seen entering an unusually shaped culvert to enable the slope of the embankment to be maintained. 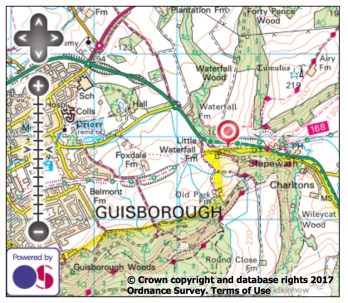 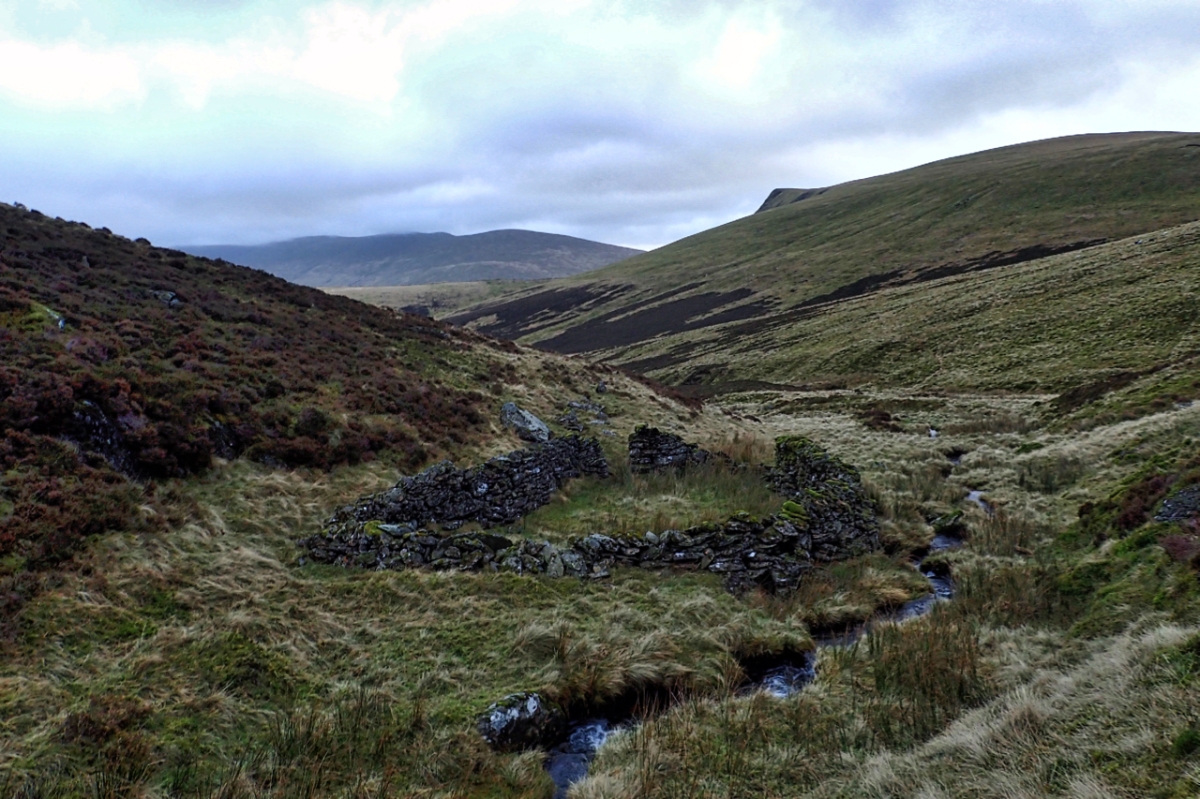 I don’t know who Jackson was. Maybe he built this sheepfold. Maybe he breathed his last breath here after finding himself lost in a blizzard. But it’s a fold I’ve visited many times before on mountain marathons and orienteering events. A remote and quiet place, by the side of Stile Gill; great for a wild camp. The cloudbase is higher today with Blencathra summit just visible for the first time in the last four days.

And so 2016 draws to a close. The time to welcome and to be upbeat about the new year but after the cataclysmic events of the past six months it would be so easy to fall into nihilism. Not to dwell on the B word but when Nigel Farage says “For those that are here that aren’t particularly happy with what’s happened in 2016, I’ve got some really bad news for you – it’s going to get a bloody sight worse next year”  is there any hope? And then there’s Trump. Say no more.

But I do have hope. Hope that the new laws and regulations that need to be created will be far stronger for employment, the environment, equality and human rights. Hope that May and her cronies can begin to really work hard at healing the cleft the right have created in the country. Hope that they start to care for and preserve our NHS, welfare state and public services. Hope that education, unemployment and low cost housing stock will be given the priority our children and grand children will need. Hope that the Labour party can rebuild itself to be an effective opposition. And hope the derisive rhetoric and trenchant comments that has become the norm since Brexit will dry up.

I can honestly say I know of no one who is happy with the current climate. A black cloud looms over. I have read the media and have heard first hand of some who have been subjected to racist comments. Perhaps I lead an insular life, content with my own company in the hills, but throughout the country there must be thousands of disparate groups who despair. If these can come together and work together then there is indeed hope for all of us.

So let’s forget the bad decisions of 2016, have a clean break and welcome in the New Year on a hopeful note. In the words of Eric Idle:

Some things in life are bad,
They can really make you mad.
Other things just make you swear and curse.
When you’re chewing on life’s gristle,
Don’t grumble, give a whistle!
And this’ll help things turn out for the best
And
Always look on the bright side of life! 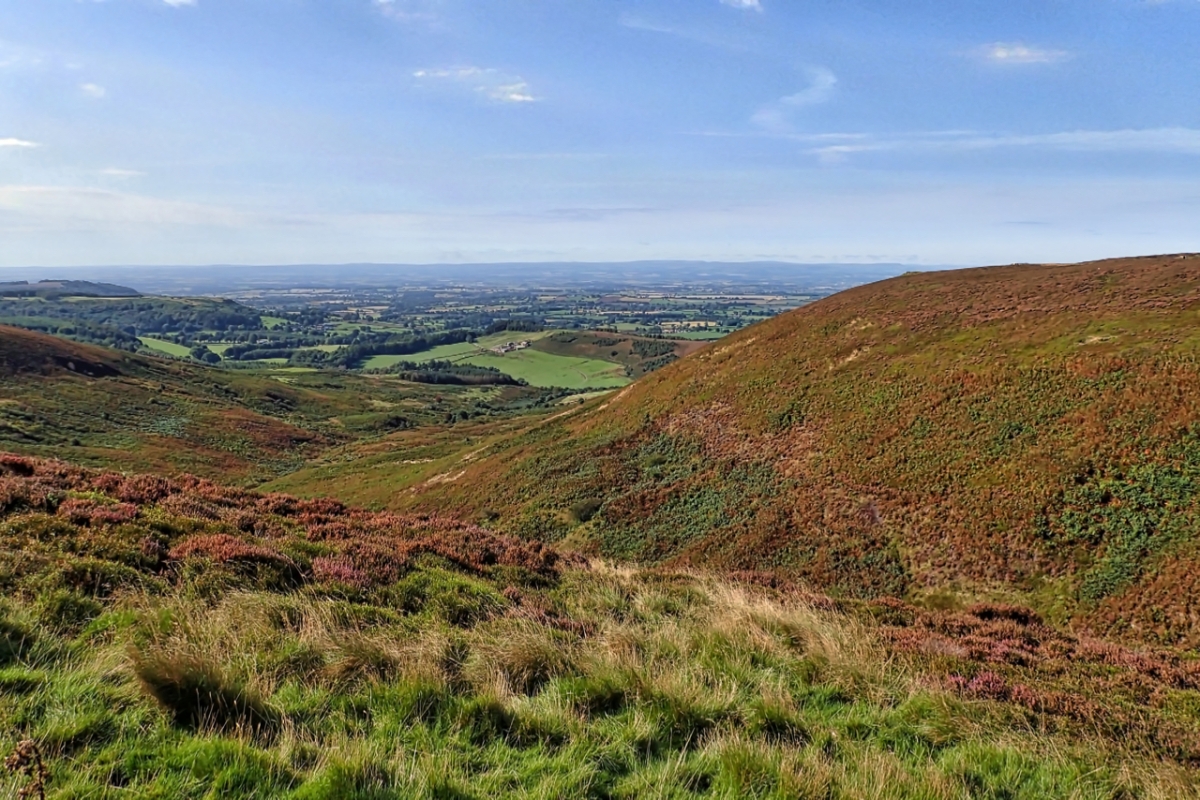 In the Tabular Hills, limestone country in the southern half of the North York Moors and a view west over the Vale of Mowbray to the Yorkshire Dales, supposedly one of the “finest views in all of England”.  White Gill, the stream at the bottom of a deep valley with no name, and downstream, the village of Kepwick.

The view though is largely manmade. The Vale of Mowbray is prime agricultural land, a patchwork of fields growing barley, wheat and nitrogenous demanding grasses for silage. Even the slopes of heather in the foreground are managed to maximise the production of grouse.

Last week I went to a talk about medieval Westerdale by Carol M Wilson, a resident of the village and author of Westerdale: The Origins and Development of a Medieval Settlement. It was fascinating and has given me the inspiration to do more wanderings over that way.

And what better place to start than to head for a small valley which medieval name, Wulverdalebec, translates as the “stream through the wolves’ valley”. Especially as it was Open Access Land and I had no dog with me.

A secondary incentive was that Ms Wilson describes a cross on a rock in the valley that was found a few years ago when years of moss was washed off during a storm. There is a photograph in her book and although there is no way to date the cross, the suggestion is that the valley was used as a route off the moors into the main valley below.

The modern name for Wulverdalebec is Wood Dale down which flows Clough Gill. The first mention of it is in a 12th century document in which Bernard de Balliol (of Barnard Castle fame) granted land in Westerdale to the monks of Rievaulx Abbey including the right to snare wolves.

I often wonder what the moors were like in ages past. It is said that by the time the Romans left the limits were more or less established to what we see now. But the dominance of heather did not come about until the mid 19th century when management by regular burning started leading to a decrease in species diversity. I imagine a mixture of heathers, grasses and dwarf shrubs such as bilberry and cloudberry. The monks would have exploited the moors for sheepwalks preventing regeneration of trees except in the steep gills which the sheep avoided. No doubt because of the wolves.

I found the gill where a modern landrover track crosses and started to follow it downstream. It was deep with sandstone crags both sides and full of tumbled rocks, cascades and fallen oaks. Not an easy descent but not atypical of the many small wooded gills that run off the high moors. If there is such a thing as a natural wood I can imagine this gill to be it. I disturbed an owl but there was evidence of gamekeeper activity. Several animal traps set on conveniently placed logs across the beck.

I am afraid I can not see how this could ever have been a viable route off the moors into the valley below? If I was navigating off the high moors then the obvious way would be to go down the spur and keep well away from the deep wooded gills. As far as man is concerned it’s the line of least resistance. My route on to the moors had followed a distinct holloway from Top End to the top of gill. This would have been created by centuries of sledging peat off the moors. A gentle descent. 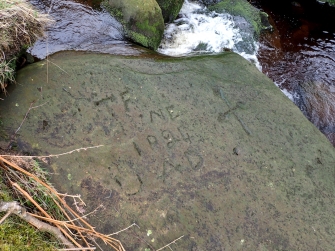 I failed to find the cross photographed in the book but did find another along with some letters and a date ‘1924’. 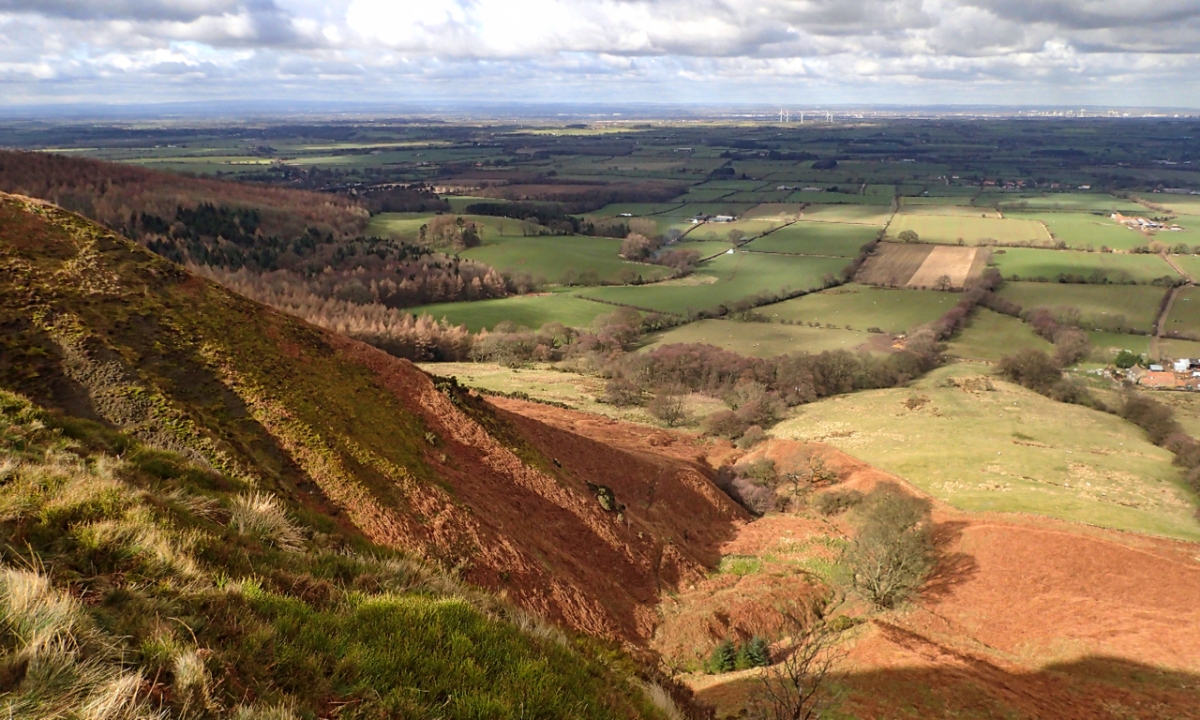 A yellow warning for snow and ice last night so disappointed to wake up to see just a sprinkling. And by late morning even that had gone leaving the hills grey and drab. I  wonder if those at the Met Office had read the fable of Aesop about the boy who cried wolf. Perhaps in their version he cries “yellow warning for wolf”.

But heading back to the van through the Lordstones Country Park the sun came out just for the briefest moment. This is overlooking the village of Carlton (just left of centre). The country park extends down the escarpment to the green pasture fields. In the summer the bracken is at its full height and becomes impenetrable. In 2001 during the foot and mouth crisis Lordstones was the only bit of countryside that wasn’t off limits. It saved my sanity during those long months. Two laps of the park down to the bottom and back were the order of the day. 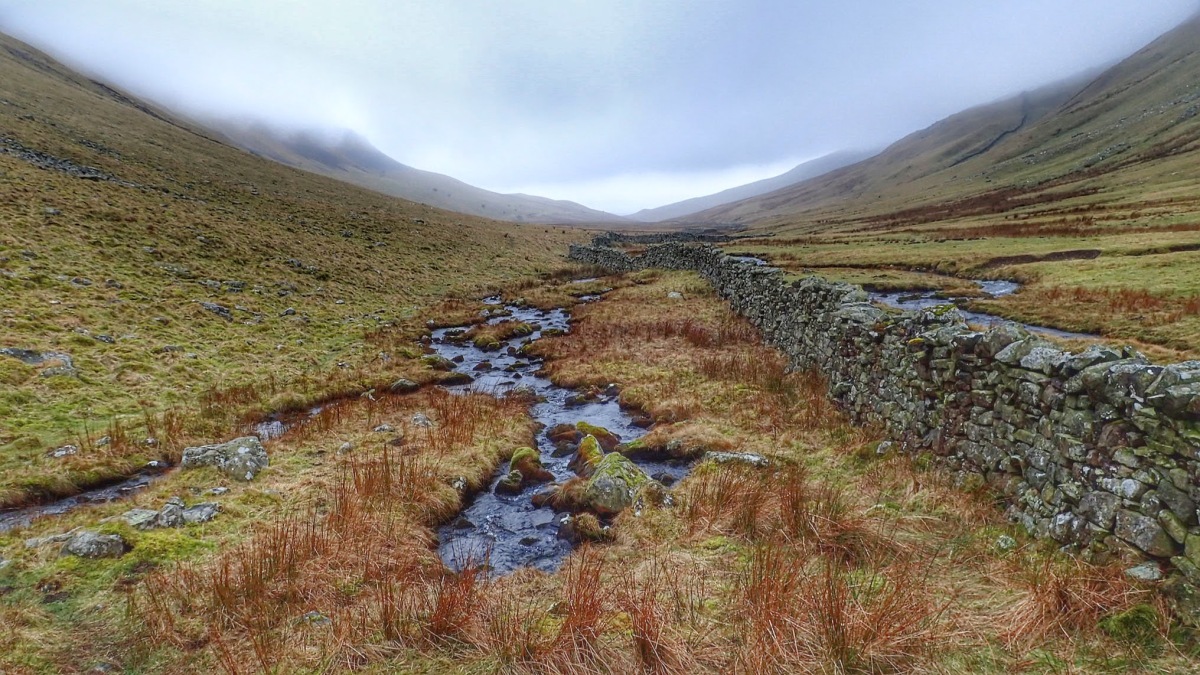 Across the Pennines to High Cup Nick above Appleby to see the Great Whin Sill, an intrusion of volcanic dolerite between limestone layers. Well I would have seen it if it had been clear. I managed to get this snap of High Cup Gill before I climbed into the cloud.