I’ve been aware that the amount of free gigabits I have available for this blog is gradually diminishing. I probably have a year or so left. But nevertheless I’ve taken the plunge and moved to my own domain:

So any bookmark or link to the old site will need to be changed. Or if you have opted for email notifications then that option will need renewing.

And at great expense, I have rebranded the new site (I had a few comments about the yellow background) so it’ll now be minimalist white. Hosting the site on my own domain will also mean I can utilise the OS mapping better rather than just inserting a screen grab. Watch this space as they say. Or rather watch the new space.

I think I’ve migrated the whole of the archive over to the new domain but if you come across any oddity please let me know.

Thanks for your support over the years. I hope it continues with the new site. And don’t forget “fhithich” is Gaelic for raven and is pronounced the same as its call!

Are you new to blogging, and do you want step-by-step guidance on how to publish and grow your blog? Learn more about our new Blogging for Beginners course and get 50% off through December 10th.

WordPress.com is excited to announce our newest offering: a course just for beginning bloggers where you’ll learn everything you need to know about blogging from the most trusted experts in the industry. We have helped millions of blogs get up and running, we know what works, and we want you to to know everything we know. This course provides all the fundamental skills and inspiration you need to get your blog started, an interactive community forum, and content updated annually.

It must have needed a torrent of water to have carved this gill on Pamperdale Moor near Osmotherley. Certainly not water from the spring mapped as Holy Well and situated way down the gill not far to its junction with Crabdale Beck. The “spring” in the photo, higher up, doesn’t even qualify with an Ordnance Survey symbol. It’s just a sodden patch of chalybeate stained moss. Behind me the now dry gill continues upwards culminating in a notch on Stoney Ridge with Scugdale. And there lies the clue, for at the time of the last ice age Scugdale was dammed by the glacier and was full to the brim with water. But at some time the narrow ridge gave way releasing millions of gallons of water from Lake Scugdale and carving the gill.

With low cloud shrouding the North York Moors I had to dig into my bank of “bad weather” ideas. Earlier this year I recalled seeing a large new sandstone “PRIVATE NO ACCESS” sign which I thought a bit over the top. So I headed for Kempswithen, the site of a 18th-century agricultural experiment but now under intensive management for grouse shooting. But the stone had disappeared, or had my navigation let me down. A hardcore base suggests it could have been here. Instead, there was a new small sign:

“NO FOOTPATH
NO BIKES
NO DOGS”

Now, no bikes I can understand, no dogs too but no footpath! Technically it’s probably correct but this is Open Access Land over which we have the freedom to roam. Clearly, it is intended to intimidate walkers into keeping away.

On the way back I took in Percy Rigg over Kildale Moor and came across the missing sandstone “PRIVATE NO ACCESS” sign. Or its twin. Maybe I’m not going doolally after all. I just had to take a photo in case it moves again. Way over the top. The siting of this stone is actually on the boundary of Open Access Land which is to the right in the photo below. To its left is a small area of heather moorland which somehow escaped Open Access designation. An anomaly. Either way, the intention is clearly to discourage walkers from enjoying their freedom to roam. They’re a red rag to a bull to me. 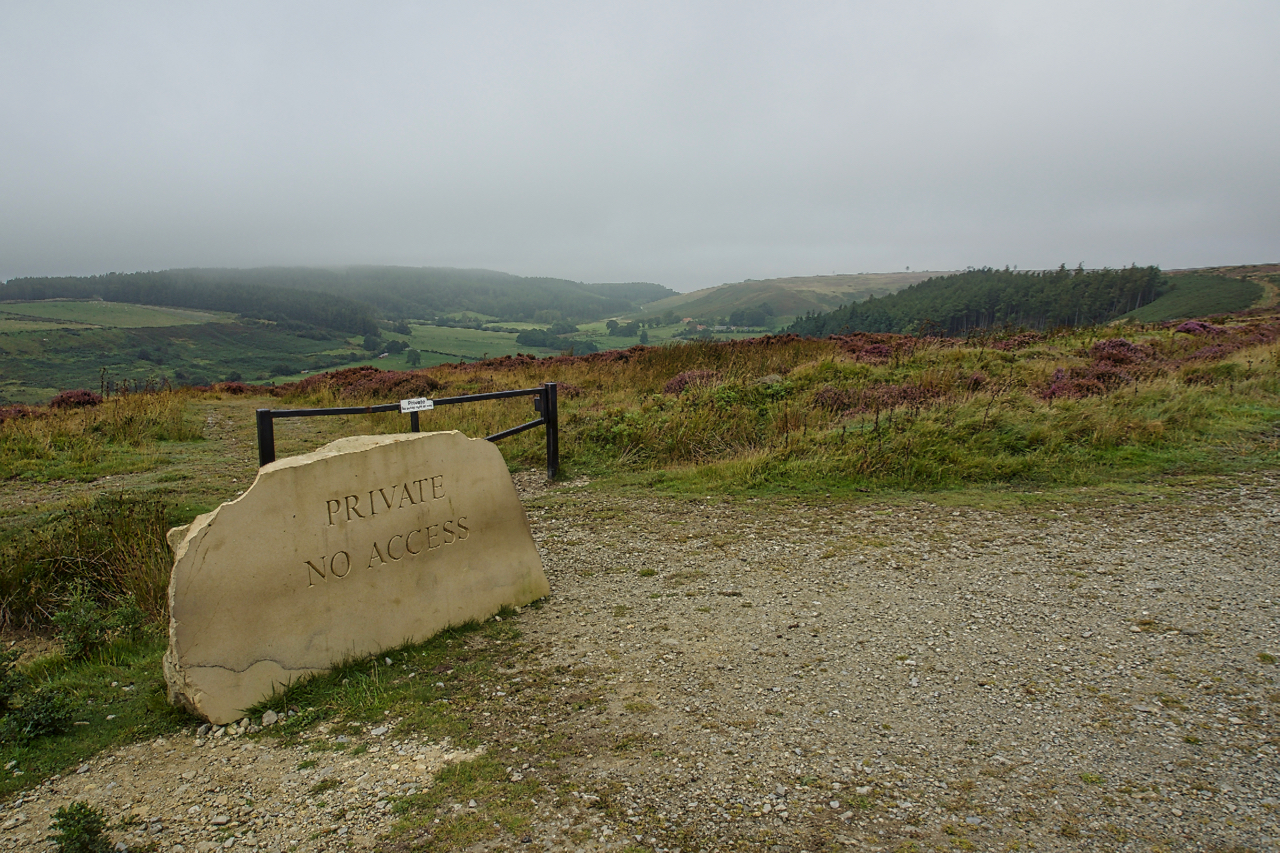 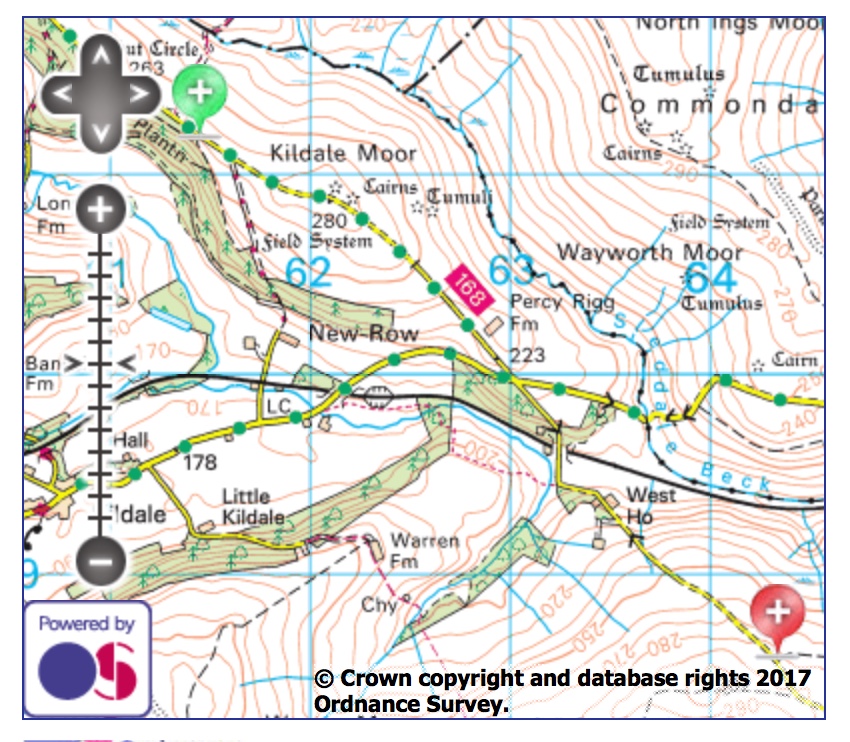 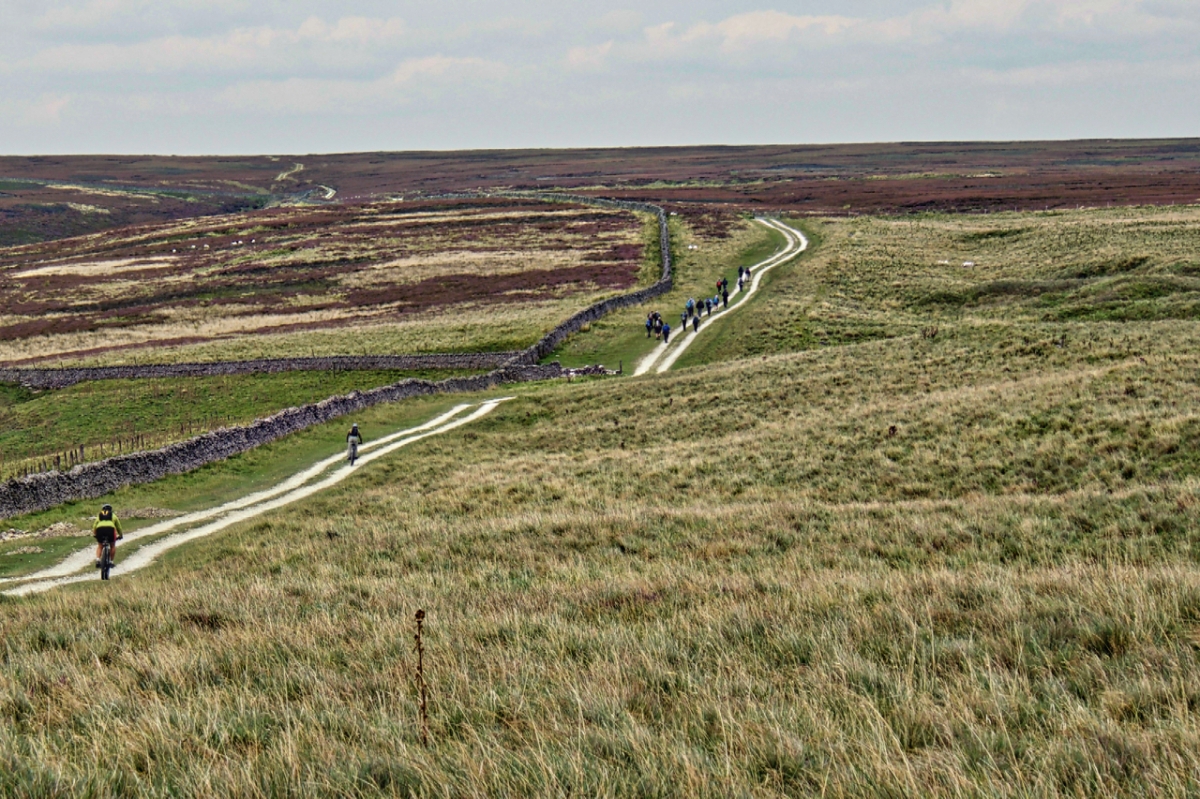 The ancient drovers’ route along the western edge of the North York Moors. A route that probably has been used since prehistory. The name “street” implies Roman usage and it’s mentioned by name in a document of 1577. Traffic peaked in the 17th and 18th centuries when herds of cattle were driven from Scotland to markets at Malton and York many eventually destined for London. Covering between 9 and 10 miles a day the herds of Galloway and West Highland cattle, up to 300 strong, needed a “stance” to graze for a day or so to recover for the next leg of their journey. One such stance was Limekiln House inn, the remains of which are barely discernible today in the dip opposite the wall junction, the oolite limestone providing good pasture around. The limestone was also of good enough quality for burning to produce lime and was extensively quarried along the street, providing another source of income and the name of the inn. By the 19th century, the railways had killed off the cattle droves and Limekiln House was deserted by 1897, the last licensee being Mary Kendall who “retired” to a farm in Ryedale. Today the route forms part of the Cleveland Way and is popular with cyclists and walkers. 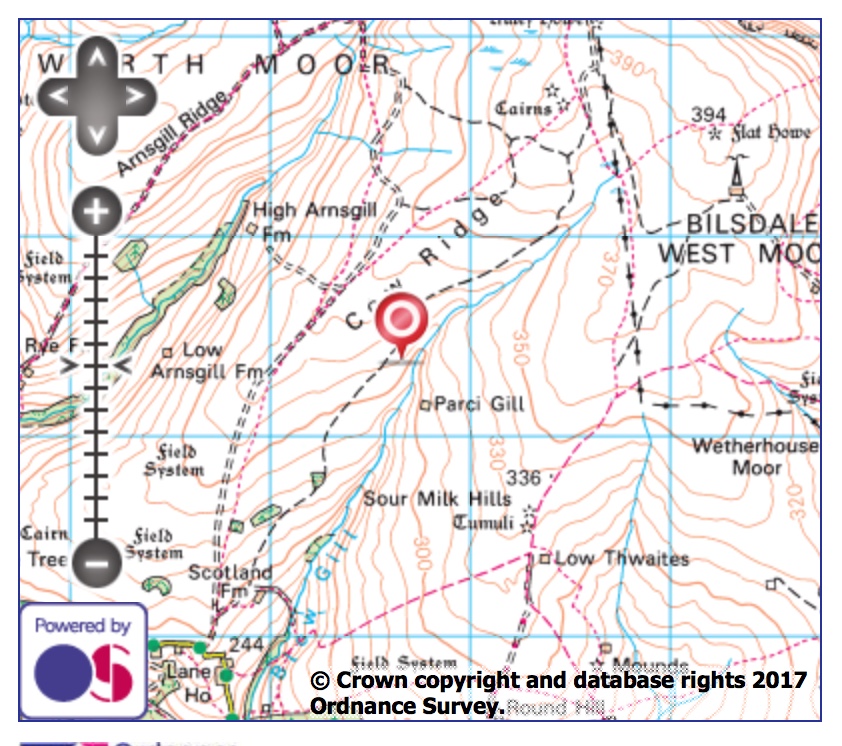 Not a pretty picture. Just an example of the type of traps used to ensure the heather moors are eradicated of small mammalian predators, such as stoats and weasels, which may feed on the young grouse chicks. Complete eradication of all “vermin” is the aim. This is in spite of the moors being designated a Site of Special Scientific Interest. These traps are very common, placed on a log across a ditch or stream, or along the top of a wall, but well out of sight of the general public. It wouldn’t do for a member of the public to find a stoat with its back broken. The cage is to ensure nothing bigger than the target species can enter; not entirely full proof. Of course, stoats do not differentiate between grouse chicks and those of ground nesting waders like Curlew, Golden Plover and Lapwing. These species do benefit from the eradication of stoats, a fact much publicised by the grouse shooting industry but the cost is a significant reduction of the biodiversity of the moorland and a much poorer countryside. And the cost is not just aesthetic. In a 2014 survey, the Friends of the Earth found that 30 grouse shooting estates, covering over half a million acres, received £4m of public subsidy including one owned by the Duke of Westminster, the richest landowner in Britain with land holdings estimated to be worth £9bn.

Another view of Roseberry Topping, this time from Pinchinthorp on the Great Ayton to Guisborough Road. Pinchinthorp is an ancient township, the name deriving from Pincium, or Pinchun, a Norman family who held land here in the 12th century. To describe Pinchinthorp today as a hamlet is a bit of an overstatement. 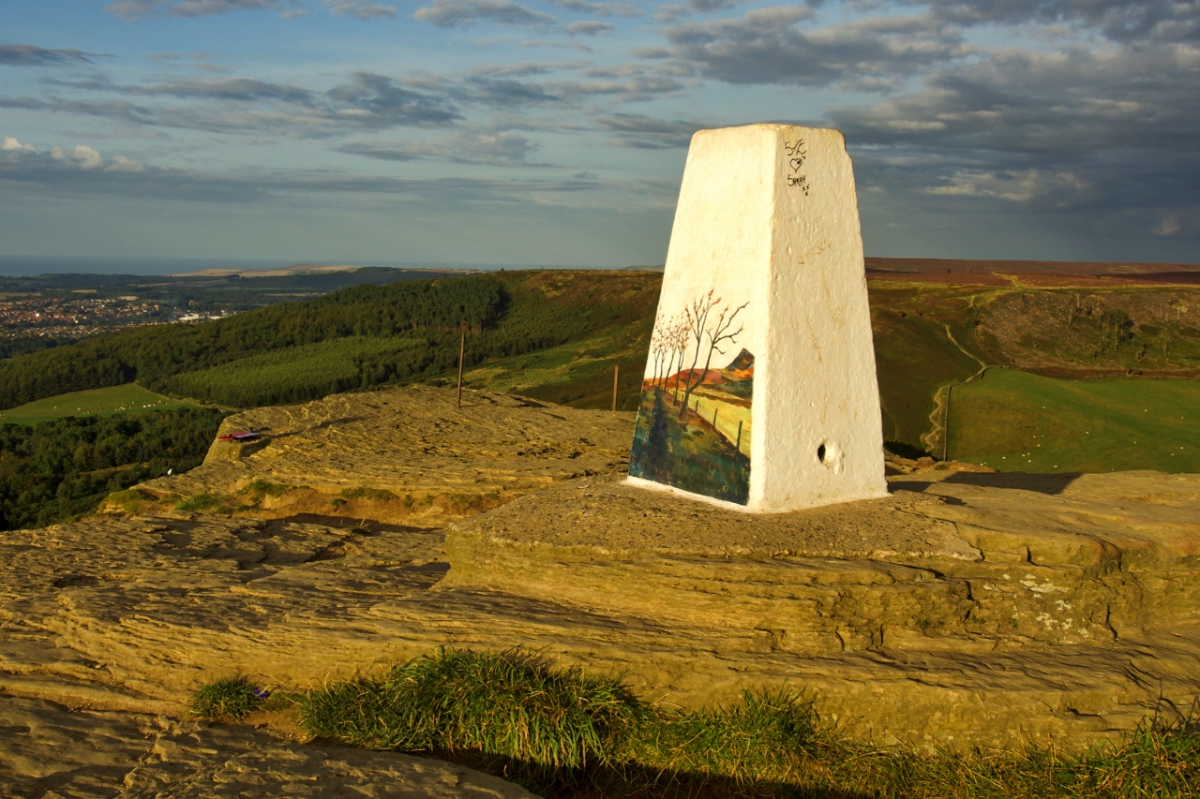 A really good piece of work by Rachel Lonsdale, simple but effective. But I’m not convinced Roseberry needs it. I fear another step towards turning the National Park into a theme park. The idea is to discourage graffitists but with the artwork only on one side, there are three other blank canvasses. It is only a matter of time. Ste and Sarah have already left their mark.

An unexpected surprise as the sun broke beneath the bank of thick cloud that had covered Cleveland all afternoon. The light lasted a few minutes before the sun sank below the horizon. I happened to be at Bank Foot at the time, near Ingleby Greenhow. 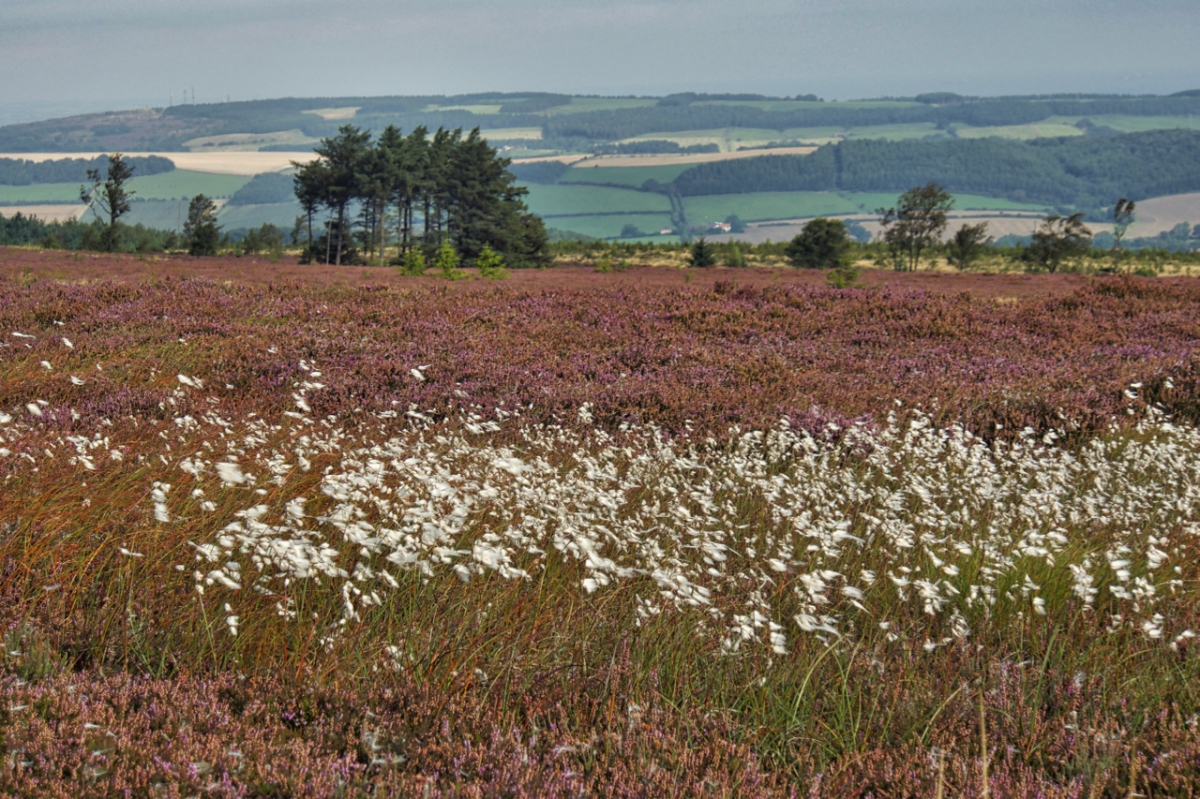 This stand of larch has always intrigued me. It first appears on the 1952 edition of the Ordnance Survey map, is circular and isolated on the heather moor. It can not be self-seeded. Who planted it? And why?