Dry stone walls, ubiquitous throughout upland Britain or where rock outcrops and is easily quarried, often have holes at the base to allow sheep to pass. These are cripple or sheep holes or smeuses, although this name is often used in lowland Britain where hares or rabbits habitually pass through a hedge. Every region has its own name: sheep creeps, sheep smoose, thawl, lunky hole, hogg hole. And in Cleveland: smoot hole which possibly derives from the Old Norse word smátta meaning a narrow lane. A typical smoot is sheep sized so cattle can not pass and when passage is not wanted the hole is easily blocked by a board or large stone. Some smoots are specifically built for rabbits to discourage burrowing which would undermine the stability of the wall. On very old walls some may have been included purposely to catch or trap rabbits.

Not as iconic a steam engine as the ‘Flying Scotsman’ but the ‘Royal Scot‘ has been a popular draw during its week on the North York Moors Railway in spite of loosing a day due to a mechanical inspection failure. Built in 1927, the engine operated on the West Coast mainline between London and Glasgow. Here it is steaming over Sleddale Beck on the Esk Valley line on its way back to the Southall Railway Centre in London. It’s pulling a single ‘welfare’ coach and accompanied by a preserved diesel engine Deltic 55022 ‘Royal Scots Grey‘. 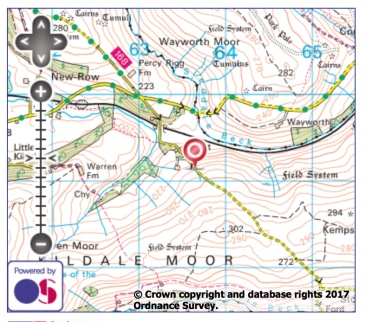 Not the prettiest of the villages of the North York Moors. Commondale lacks the sandstone and pantile architecture other villages. Brick is the material most used. The church, school, village hall and, in the photo, the shop, now converted to a private residence, are all built of brick. A deep red brick manufactured in the local brickworks that prospered under the ownership of Alfred Crossley. Brickmaking in Commondale ceased in 1947. The site is now a scout camp.

Commondale was referred to in the Domesday Book as Camiesdale and by 1273 as Colemandale. The name is said to be derived from Colmán of Lindisfarne, a 7th century monk from Whitby who became Bishop of Lindisfarne and a saint.

In the photo the white rendered building on the right is the Cleveland Inn otherwise known by the delightful epithet of Hacky Tom’s.

You might be forgiven for thinking that White Cross is so named because it is white but the whitewashing has been carried out by all the boundary stones of the Dawnay Estate. The stone post is actually 19th century sandstone but the limestone base is much older probably medieval. The original Christian cross now resides in Whitby Museum. The cross can be found at the junction of two ancient roads, Smeathorns Road, linking Lingdale with Castleton and the old turnpike road from Stokesley to Whitby and a mile or so out of Commondale. 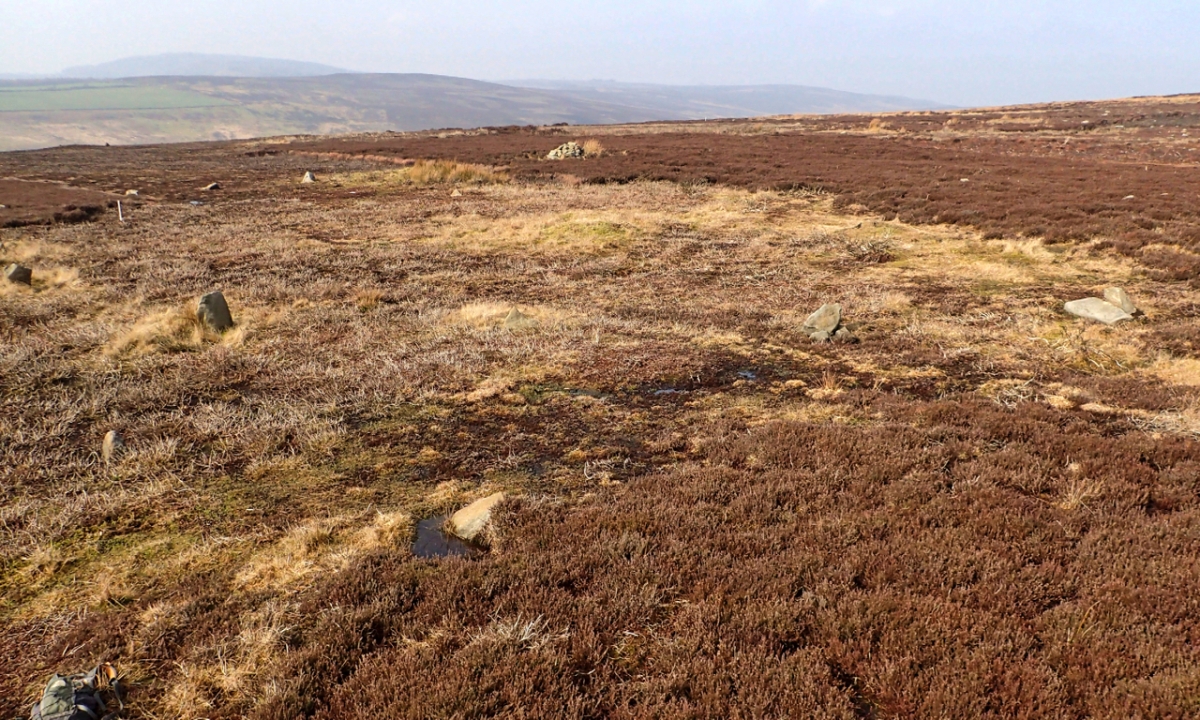 High on Wayworth Moor overlooking the quiet valley of Sleddale is a stone circle, dating from the Neolithic Age. Ritualistic monuments, are few and far between on the North York Moors. Barrows, burial mounds, abound but monuments built purely for ceremonial purposes are rare. There is a henge on Harland Moor to the south on the Tabular Hills and of course there are several others in the Vale of York notably Thornborough. The stone circle at Sleddale is by contrast very modest and would have been built when the moors were still covered by forest. Perhaps a meeting place for several extended families. It comprises about 16 stones, the highest just 600mm high. Not quite circular, more oval, about 20m across. Some excavation has taken place but no finds were found. Being so low lying the circle is difficult to photograph. This is where a drone would come in handy. 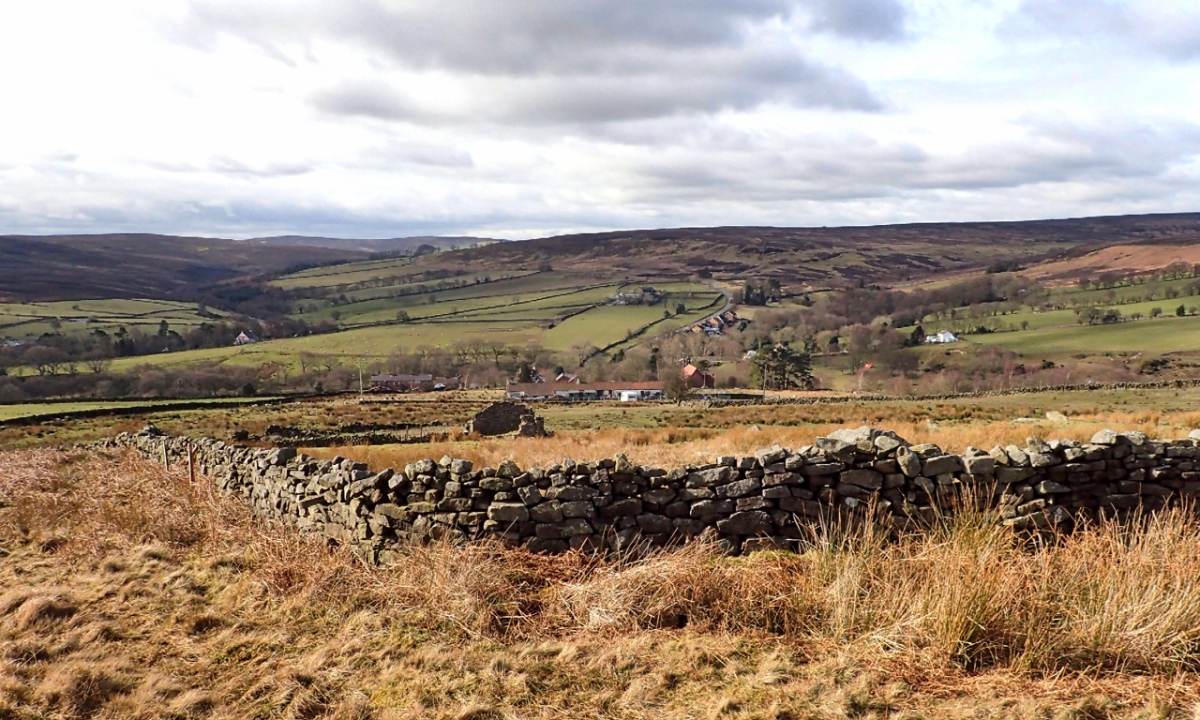 Commondale seems out of place. A village more suited to the dales of West Yorkshire with its steep sided valleys and industrial buildings. There is none of the vernacular sandstone architecture common in other villages of the North York Moors. Everything is built in a deep red brick. The church of St. Peters is brick, the old school house is brick, the old shop is brick. For Commondale is a “modern” village, still more of a hamlet really, but substantially built at the end of the 19th century. And the source of its wealth were those bricks.

It was Stokesley business man John Slater Pratt who opened the first brickworks in the middle of the 19th century which ceased operations when Pratt died in 1867. Five years later  John Crossley restarted it but it closed again when he emigrated to America in 1882. Again it reopened under new owners but Crossley returned and brought back the works. His son Alfred took over until operations ceased for good in 1947. It was Alfred grew the business and whose name is on the village hall.

The name Commondale is said to be derived from Colmán of Lindisfarne, a 7th century monk from Whitby who became Bishop of Lindisfarne and a saint, although in the Domesday book the valley was referred to as Camiesdale. The first written documentation of Colemandale was in 1273.

The moorland across the dale is Kempswithen, a ridge of land lying between Commondale and Baysdale.  It was the scene of an ambitious agricultural experiment, the brain child, in 1773, of Sir Charles Turner, owner of the Kildale Estates. The snow nicely accentuates the network of ditches he had dug to drain the land.

In the late 18c landowners were keen to adopt new farming practices and to improve yields. After paring and burning the surface vegetation and ploughing the ashes back in, Turner brought in tons of lime at considerable expense to improve the moorland soil. Normally 800′ was considered the maximum height for the cultivation of crops on the North York Moors but Kempswithen rises to over 1000′. Much to the surprise of his contemporaries Sir Charles did successfully grow crops of corn, wheat and barley although success is perhaps the wrong word considering the expense of labour and materials incurred in the improvements.

Turner died in 1783 and the land was abandoned soon after following a slump in the cereal markets. Later the Victorian fashion for shooting meant that heather was encouraged resulting in the grouse moor we see today. Again the snow highlights the patchwork of heather resulting from the practice of burning off old growth to encourage new growth on which the grouse like to feed.

I must have driven through Commondale a hundred times but it’s only on when biking I noticed this hand stone just west of the village. It lies on the old Stokesley to Whitby turnpike road and gives directions to GISBE (Guisborough), WHITBY and STOXLAY (Stokesley) although these inscriptions are a bit weather worn.

The stone probably dates from 1711 when the Justices sitting at Northallerton ordered that guide posts should be erected throughout the North Riding at all moorland crossroads. 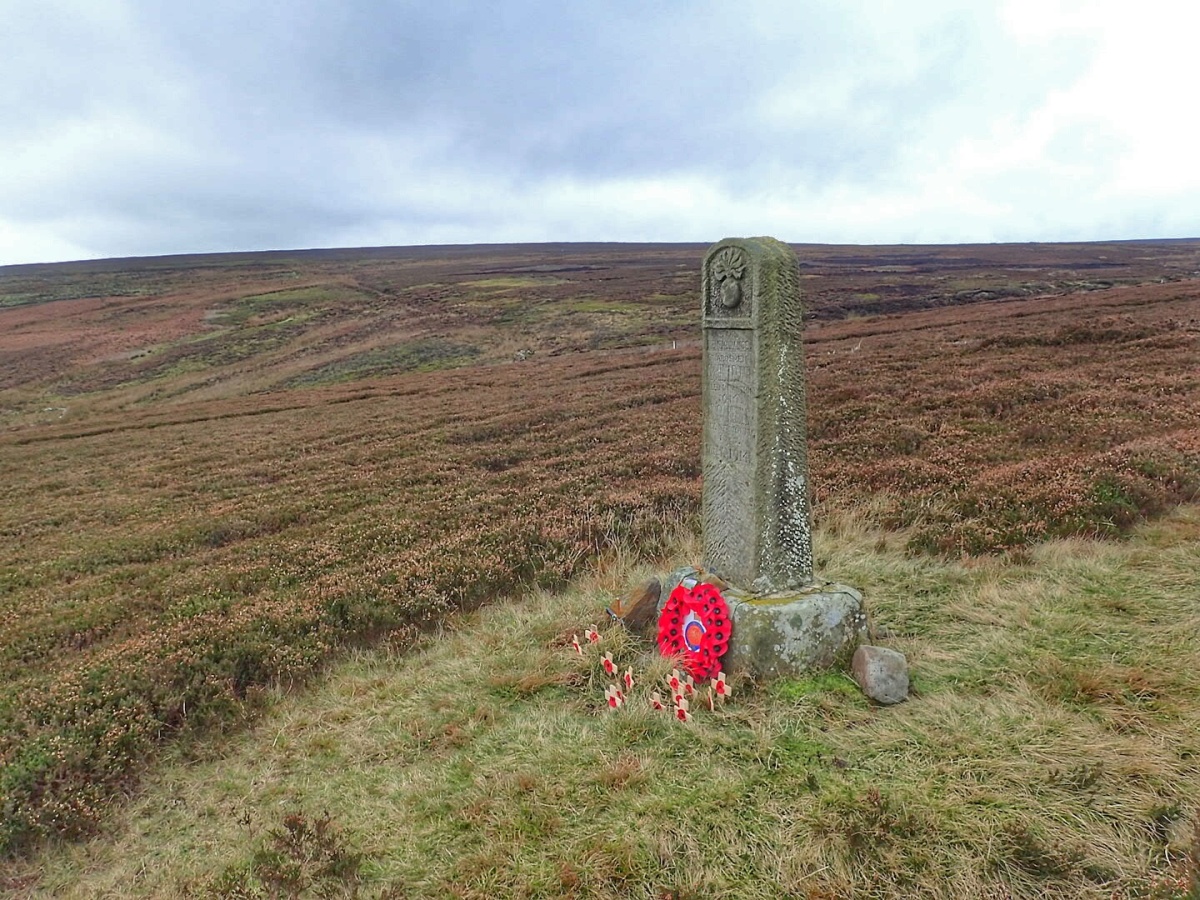 Robbie Leggett and Alf Cockerill were boyhood friends who knew these moors well. Later they both became shepherds for the Gisborough Estate. When the First Work War broke out they were amongst the first to join up, taking off to London to join the Grenadier Guards. Neither were to return to the moors. Robbie had lied about his age, he was just 17 and was killed in action at the Battle of the Somme in 1916. His body was never found. In the same year Alf suffered a serious head wound at Ypres developing epilepsy. He was repatriated and hospitalised back but never recovered, dying of epilepsy and meningitis in 1920. 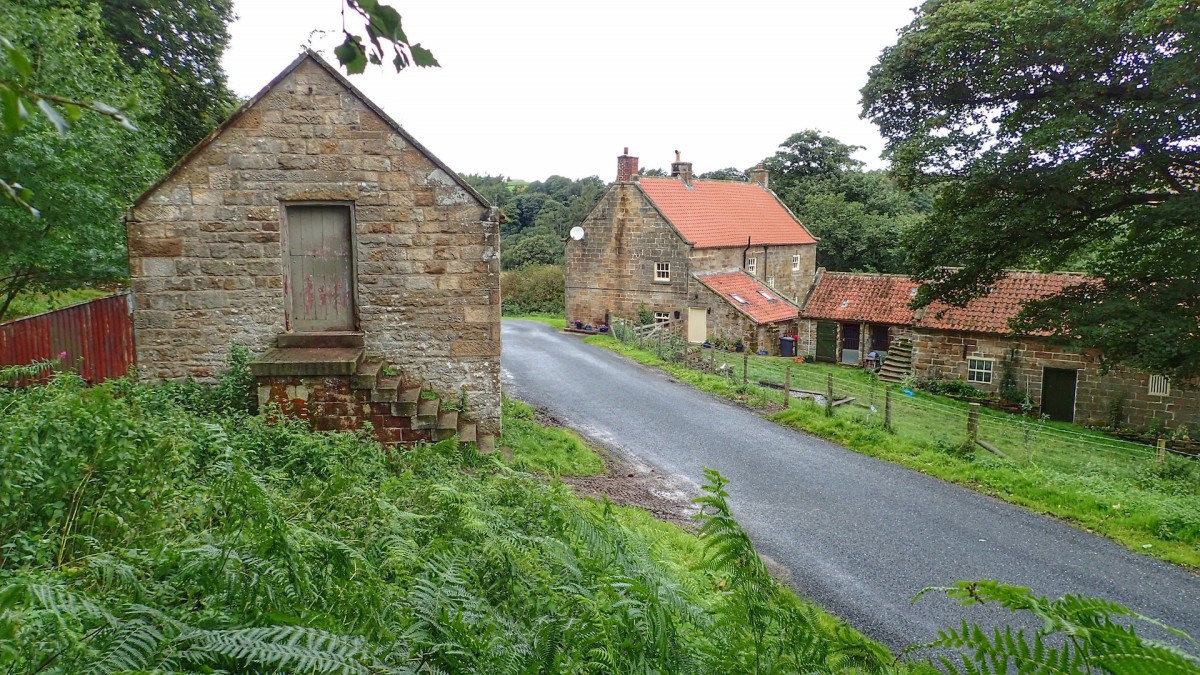 West House, a former farmstead on the road to Westerdale. In 1871 a vagrant, Sam Edmunds from Staffordshire, called at the farm looking for work. The farmer agreed but later that evening it seems Edmunds became worse for drink and threatened the farmer. The farmer bolted himself in and a farm servant managed to slip away to get help from New Row, a terrace of ironstone miners’ cottages, a good mile away in Kildale. Sometime later the servant returned with two other men and confronted Edmunds near the railway bridge, a short distance from the house. In the resulting scuffle Edmunds hit one of the men with a stick who died the next afternoon. Edmunds received the death sentence at York assizes.